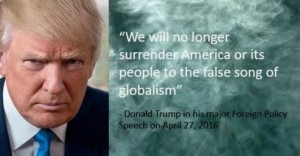 Before heading to Cleveland to accept the Republican nomination for president, Donald Trump paid a high-profile visit to Capitol Hill, where he hoped to unify Congressional Republicans behind his presidential campaign. Many of the 247 Republican Representatives and 54 Senators were cordial to their party’s presumptive nominee, but others remained hostile and weren’t shy about expressing it to reporters after leaving the closed-door meetings.

One Congressman reportedly demanded that Trump promise to protect Congress’ Article I powers if he is elected. Trump tactfully refrained from pointing out how many times the Republican Congress has unilaterally surrendered its Article I powers, including the power “to regulate commerce with foreign nations.”

Senator Jeff Flake of Arizona openly mocked Trump at the meeting and then bragged to reporters about their “tense” exchange. Flake, an unrepentant member of the Gang of Eight that produced the 2013 amnesty bill, has already announced plans to resurrect that discredited bill next year no matter who is elected president.

Trump’s next stop was a private meeting with Senator Ted Cruz, who inappropriately brought his campaign manager Jeff Roe to the meeting. Two months after suspending his campaign, why does Cruz still utilize a high-priced campaign manager to join high-level discussions with the presumptive nominee?

The answer is that Cruz never stopped running for president, and the people who spent $158 million — more than twice what Trump spent — to back Cruz in 2016 are not going away. Cruz recently set up two new nonprofit organizations to keep his key people employed, prematurely launching another run for president in 2020.

Cruz’s delays in endorsing Trump and his disloyal preparations to run for president in 2020 help only one person: Hillary Clinton, which is what some Republican mega-donors actually prefer, because they are globalists who oppose Trump’s stances against immigration and free trade.

The globalists will never accept Trump or anyone else who puts Americans first, and they are using Cruz to undermine Trump’s campaign. Cruz’s mega-donors think they can buy their way to control of the Republican Party even if Trump wins the presidency this year, and they are already funding the takeover of several conservative organizations.

These globalist money-men are also hostile to our Constitution, which they want to rewrite in a new constitutional convention, also called “Convention of States.” Eric O’Keefe, who has close ties to the billionaire Koch bothers, backs the Never Trump movement and is a board member of the Convention of States project.

Justice Scalia in May 2015 called this attempt for a new constitutional convention a “horrible idea,” but several of its cheerleaders were able to get on the Republican platform committee that is meeting this week. Cruz has praised the delusional proposal to add many amendments to the Constitution, and some of his donors are part of the same group that seeks to alter our Constitution.

Cruz earned support by many conservatives when he first came to D.C. four years ago. It is long overdue for Cruz to repudiate the support of these globalists who are working against Trump and against our national sovereignty.

“We will no longer surrender this country or its people to the false song of globalism,” Trump promised in his April 27 foreign policy speech in Washington. That sentiment is anathema to the globalists who provide much of the money for Republican candidates.

“I am skeptical of international unions that tie us up and bring America down,” Trump continued. “Under my administration, we will never enter America into any agreement that reduces our ability to control our own affairs. Americans must know that we’re putting the American people first again.”

When Trump vows to “put Americans first” the globalists complain about “protectionism,” as if there’s something wrong with expecting our own government to protect American jobs and America’s economic interests.

“On trade, on immigration, on foreign policy, the jobs, incomes and security of the American worker will always be my first priority,” Trump said. “Both our friends and our enemies put their countries above ours, and we – while being fair to them – must start doing the same.”

In a June 22 speech in New York, Trump intensified his attack on the globalist money interests: “We’ll never be able to fix a rigged system by counting on the same people who have rigged it in the first place. The insiders wrote the rules of the game to keep themselves in power and in the money.”

“It’s not just the political system that’s rigged, it’s the whole economy,” Trump continued. “It’s rigged by big donors who want to keep wages down. It’s rigged by big businesses who want to leave our country, fire our workers, and sell their products back into the United States with absolutely no consequences for them.”

We’ve waited a long time for a Republican candidate to express these pro-American views, but Donald Trump’s victory in the presidential primaries proves they are what the voters want to hear.