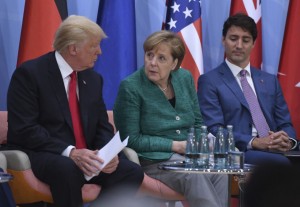 President Donald Trump stood firm against the Paris Accord on Climate Change, making the United States the only nation of the G-20 Summit to do so. This gives hope to Americans who believe in America First, and it presents a major obstacle to the globalists who want to use multilateral trade agreements, treaties on issues like climate change, and other related issues, to construct a New World Order.

“The U.S. seems to be emphasizing ‘we retain full right to take unilateral action,’” lamented Thomas Bernes, a former official with the International Monetary Fund and the World Bank. “They’ve stepped aside from a system which they helped largely to create and it’s a little bit rudderless right now.” Bernes is presently a fellow at the Centre for International Governance Innovation in Waterloo, Canada, and it can be safely assumed that “unilateral action” is not something favored by a “fellow” at an “International Governance Innovation.”

The G-20 Summit, which consists of 19 industrialized nations plus the EU, met Friday and Saturday in Hamburg, Germany. Host Angela Merkel, chancellor of Germany, said, “I always said that this wouldn’t be easy and that we shouldn’t hide areas of discord.”

The divisions are largely between the U.S. government, represented by Trump, and the rest of the G-20 members. The other political leaders favor international regulations to supposedly fight global warming — or as it is more commonly called now, global climate change. Trump pulled out of the Paris Accord on Climate Change, despite being outvoted 19-1 on that issue.

Steel trade appears to be the biggest area of dispute among the nations when it comes to tariffs and protectionism. Trump’s support for steel and coal are believed to have contributed greatly to his huge win in Pennsylvania in the last presidential election. He is the first Republican since the 1980s to carry Pennsylvania in a presidential election.

Trump has complained about “dumping” of steel and other such products on the world market. “Dumping” is when a nation’s government subsidizes certain of its industries so that they can sell their products cheaper in other countries, and thus win a greater share of that market. He has threatened a global “trade war” over the issue.

Italy’s Prime Minister Paolo Gentiloni said that Trump was “very open” in the closed-door sessions in expressing his views. “And I think that everybody appreciated this fact.”

The newly elected president of France, Emmanuel Macron, appeared to lecture Trump on the economic reality of trade, offering the example of his own Apple iPhone. He said that it was designed in the United States, but it was manufactured in China, using U.S. parts and parts from other countries, and that it is then sold in Europe. Macron insists that this illustrates why “globalization” is a good thing.

Macron told reporters that using trade surpluses or deficits to assess the value of “free trade” is a “profound mistake,” adding, “Protectionism and dumping are both bad answers to our problems.”

Macron, a former investment banker with Rothschild and Cie Bank, and a former member of the French Socialist Party, appears to be a strong supporter of increased globalization. He arranged a meeting with Trump, Prime Minister Theresa May of the United Kingdom, Prime Minister Malcolm Turnbull of Australia, and himself, in an effort to persuade the U.S. president on the “merits” of international agreements on global climate change. Turnbull, a former venture capitalist himself, has been a leader in the effort in Australia for more government action on global climate change.

Trump resisted the pressure, however, and left Hamburg as the lone opponent of the Paris climate deal. The United States announced that it will “immediately cease the implementation of its current nationally-determined contribution” to the Paris climate accord after Trump took America out of the agreement. Led by Trump, the United States insisted that it was committed to fossil fuels and “an approach that lowers emissions while supporting economic growth and improving energy security needs.”

China’s President Xi Jinping was not as diplomatic as Macron. In an obvious swipe at Trump, Xi said that “major developed nations” were abandoning free trade in favor of protectionism. He said that China and Russia should assume more global leadership.

Trump met for more than two hours with Russia’s President Vladimir Putin, who denied any interference in the 2016 presidential election during that meeting, according to Putin’s later account of the private meeting.

While it is encouraging to those who wish to maintain American sovereignty that Trump refused to simply go along with the other nations at the G-20 summit on the Paris climate accord, the globalists who favor it are not giving up, insisting at the end of the summit that “the Paris Agreement is irreversible.”

This illustrates the danger of such agreements. Rather than entering into such multinational deals that are not in the best interests of the United States, it is better to refuse to enter into such agreements in the first place