Several members of President Donald Trump’s cabinet, as well as Vice President Mike Pence are meeting together for a weekly Bible study at the White House. CBN News reported that Trump’s cabinet has been called “the most evangelical” in the history of the country.

Pence — who described himself at the 2016 Republican National Convention as “a Christian, a conservative, and a Republican, in that order” — attends the study as often as his busy travel schedule permits. 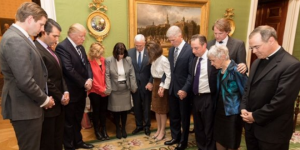 The study is led by former NBA player Ralph Drollinger, who played for the UCLA Bruins under legendary coach John Wooden and became the first player in NCAA history to make it to the Final Four of the NCAA Tournament four times. The Bruins won the national championship in two of those years.

Wooden was also an evangelical Christian, who sought to coach his team integrating Christian principles. After his retirement from the NBA, Drollinger founded Capitol Ministries, which has launched Bible studies in 40 state capitols, as well as several foreign nations. Its mission is to evangelize and disciple public servants. The organization also leads weekly studies at the U.S. Senate and House of Representatives.

Drollinger told CBN News that about a dozen members attend his weekly White House study. “These are godly individuals that God has risen to a position of prominence in our culture,” he said. “It’s the best Bible study that I’ve ever taught in my life. They are so teachable; they’re so noble; they’re so learned.”

Drollinger said he believes the regular study is the first formal one in the White House in at least 100 years.

The Christian leader spoke highly of Pence, likening him to key Biblical leaders whom God raised up to the second-highest spot in government, including Joseph, Daniel and Mordecai. “And I praise God for Mike Pence, who I think with Donald Trump chose great people to lead our nation,” Drollinger said.

Trump is invited to the study, and receives notes following each week’s meeting.

As reported by Western Journalism, Trump’s top spiritual adviser, Pastor Paula White, said that the president has a “heart for God, a hunger for God.”  She added that Trump “has a personal relationship with the Lord Jesus Christ. We’ve had in-depth conversations about God.”

A reverence for God and the Bible in Washington has strong precedent. The largest Protestant church congregation in the country used to meet at the U.S. Capitol in the 1800s. At its height, over 2,000 attended weekly, including members of Congress and the executive branch. Thomas Jefferson was a regular attendee, both as vice president and president.