WASHINGTON, DC. – On Friday, President Donald Trump issued a finalized order barring most transgender individuals from serving in the military.

Late last July, Trump announced he would direct the military to stop allowing transgender individuals “to serve in any capacity.” He cited the need for military policy to focus on effectiveness, which the “tremendous medical costs and disruption” of accommodating transgender troops would derail. He gave the military six months to prepare for the policy change.

The latest memorandum says that the policy will disqualify from service “transgender persons with a history or diagnosis of gender dysphoria,” specifically those who “may require substantial medical treatment, including medications and surgery,” except in “certain limited circumstances.” The president finalized the policy in consultation with Defense Secretary James Mattis and Homeland Security Secretary Kirstjen Nielsen.

In a statement, the White House said that “extensive study by senior uniformed and civilian leaders, including combat veterans,” informed Mattis’ recommendation, which was that troops diagnosed with gender dysphoria presented “considerable risk to military effectiveness and lethality.”

A memo from Mattis also released Friday further notes that the Obama administration justified permitting transgender service by citing a RAND National Defense Research Institute study with “significant shortcomings.” The RAND study, he said, “referred to limited and heavily caveated data to support its conclusions, glossed over the impacts of healthcare costs, readiness, and unit cohesion, and erroneously relied on the selective experiences of foreign militaries with different operational requirements than our own.”

Mattis’ memo also detailed exceptions to the policy. Those with a diagnosis can still serve if they “have been stable for 36 consecutive months in their biological sex prior to accession,” if they can meet deployability and retention standards without changing genders, and if they are already-serving soldiers diagnosed prior to the new policy’s implementation. Transgender soldiers without a gender dysphoria diagnosis may also continue to serve, although they will be expected to do so in their biological sex. 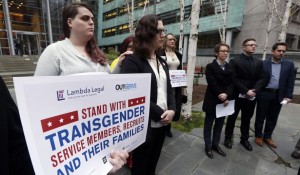 “The armed forces are not a petri dish for social experimentation, nor is military service a guaranteed right,” Heritage Foundation defense expert and retired Lieutenant General Tom Spoehr said in response to the news. Rather, “our military is the first line of defense for America’s own unique experiment in liberty.” He added that the Pentagon should be able to make case-by-case exceptions for already-serving soldiers.

However, when Trump originally announced the change, former Army drill instructor John Burk defended it in a viral video. Burk noted that depression, anxiety, color-blindness, and a “whole slew” of other conditions also render people ineligible for military service without claims of discrimination. He also pointed out that transgender individuals suffer higher suicide rates and that the American Psychological Association recognizes gender dysphoria as a psychological disorder.

“The military is not a social experiment for a very small demographic of people that want to enlist,” Burk said. “You cannot change the course of how the entire organization works.” The RAND study criticized by Mattis claims as many as 6,630 out of 1.3 million active-duty troops may be transgendered, but a defense official told ABC News in July the actual number of troops identified as such is in the “low hundreds.”

It is not yet known when the new policy will take effect. The Los Angeles Times notes that four federal district judges have issued orders blocking implementation of the ban. Arguments are slated to resume Tuesday before the U.S. District Court for the Western District of Washington.