(WNS)–Since an attempted coup in July, Turkey’s authoritarian president has cracked down on dissent and now Christians are caught in the backlash, facing denied visas, deportations, and accusations of terrorism.

The Turkish government has fired and arrested thousands of persons it claims are connected to the Fethullah Gulen Islamic movement blamed for this year’s failed plot to oust President Recep Tayyip Erdogan. But Erdogan’s regime is also using state of emergency powers against Kurds, Alevis, socialists, and Protestant Christians, Al-Monitor reported.

Even Americans are feeling the government’s wrath. In October, Turkey permanently barred Pastor Ryan Keating from re-entering the country, even though he had lived and worked there for more than 20 years. And just over a week ago, Turkish authorities charged Pastor Andrew Brunson with terrorist ties. Brunson, a U.S. citizen, worked in Izmir as a church pastor for 23 years. 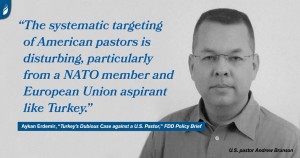 Authorities originally summoned him to the local police station in early October, told him he was a “threat to national security,” and said he would be deported. They detained his wife Norine for about two weeks, then ordered her to leave the country, Voice of America reported.

Instead of deporting Brunson as expected, officials charged him on Dec. 9 with “membership in an armed terrorist organization,” even though they had no evidence, according to the American Center for Law and Justice (ACLJ).

The legal group launched a global campaign and petition on Brunson’s behalf Dec. 14.

“We know from other cases, that putting a spotlight on the plight of Pastor Andrew is essential in generating support for this U.S. citizen,” said Jordan Sekulow, ACLJ executive director. “The more people find out about his case, the more pressure can be applied to Turkey in securing his release.”

ACLJ is working with the U.S. government and international organizations, including NATO member states, to help secure Brunson’s freedom. The pastor faces up to 10 years in prison based on the charges against him.

The Evangelical Presbyterian Church said the U.S. State Department, Senate Committee on Foreign Relations, and other officials are all working with denomination leaders to secure Brunson’s release.

His wife urged fellow Christians to pray: “Please continue to pray for a miracle, even for a Christmas miracle.”

Brunson’s situation is the worst so far, but he is not the only victim of Erdogan’s crackdown. Expatriate Protestants trying to serve in Turkey complained of deportations, visa and residence permit denials or cancellations, unreported detentions, and interrogations, as well as “unusual police interest.”

“I think the state’s interest in us has increased, but not from a positive perspective,” Rev. Ihsan Ozbek, chairman of Turkey’s Association of Protestant Churches, told Al-Monitor. “If you look at the investigations of foreigners in our churches, you can’t find anything illegal. They are not openly accused of anything. Until today we haven’t heard of a single solid accusation.”