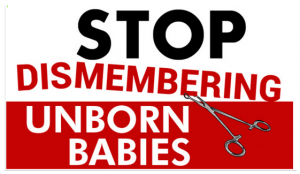 (WNS)–Conservative states and pro-life groups are flocking to support Alabama’s effort to reinstate its ban on late-term dismemberment abortions, a law blocked by a federal judge last summer.

Alabama outlawed the procedure in May, joining four other states attempting to ban “dilation and evacuation,” the most common abortion method used in advanced stages of fetal development. It requires abortionists to dilate a mother’s cervix, tear the baby apart bit by bit, and reassemble the pieces to ensure they’ve removed everything.

Partial-birth abortion, banned nationwide by Congress in 2003, involved sucking out a baby’s brains through a hole in the base of its skull while it was still in the mother’s birth canal. The Supreme Court upheld the ban in 2007.

Alabama is asking the 11th U.S. Circuit Court of Appeals to overturn the lower court’s injunction against its dismemberment abortion ban. Staver filed a friend-of-the-court brief on behalf of the American Association of Pro-Life Obstetricians and Gynecologists and the American College of Pediatricians in the hopes of convincing the court to rule in Alabama’s favor.

In addition, 22 states signed a second brief in support of Alabama’s position.

Randall Williams, legal director for the American Civil Liberties Union of Alabama, one of the groups challenging the law, said he is “confident” U.S. District Judge Myron Thompson’s temporary restraining order will stand.

“For me, it’s very promising to see these state attorneys general get together and say, ‘We agree that this law should be upheld and enforced,’”  Ingrid Duran, director of National Right to Life’s department of state legislation, told me. “To me, it’s a sign of hope.”

In response to his state’s decision to support Alabama, Kentucky Gov. Matt Bevin said “respect for life and the protection of the innocent should always transcend politics.” Texas Attorney General Ken Paxton said he signed the brief out of “minimum respect owed to human life.”

Several states, including Louisiana, Mississippi, Arkansas, and West Virginia, have bans in place, while judges have blocked similar laws in Kansas and Oklahoma.

“Everyone was just like, ‘No way, there is no way that this is happening,’” Duran said of the 2007 case. “We’re saying, please look at this method also.”

Dismemberment abortion bans would require abortionists to stop a baby’s heart before removing him or her from the uterus, either by injecting poison directly into the baby or injecting concentrated saline into the amniotic sac.

While highlighting the horrific nature of dismemberment abortion, Staver noted all abortion methods are brutal: “At the end of the day, whether you’re euthanizing, or ripping and tearing, or scalding by high concentrations of saline, you’re still taking an innocent human life at a late stage in abortion.”