(WNS)–The United States on Nov. 17 circulated a draft resolution to the United Nations Security Council urging the council to impose an arms embargo and sanctions on warring South Sudan. The resolution follows warnings from a senior UN official of escalating violence and possible genocide in the country.

U.S. Ambassador Samantha Power told the council that while an arms embargo would not prevent weapons from entering the country, it would be “an important step toward curbing the ongoing violence perpetrated by government and opposition forces against civilians.” 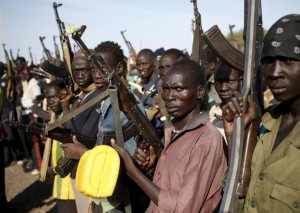 South Sudan gained its independence from Sudan in 2011. By 2013, the country fell into civil war when fighting began between forces loyal to President Salva Kiir and those loyal to former Vice President Riek Machar. The warring factions signed a peace deal in August 2015, but the fighting persists. The conflict has killed tens of thousands of people and displaced more than 2 million others. Ellen Margrethe Loj, head of the UN mission in South Sudan, said the humanitarian situation in the country remains dire, with an estimated 4.8 million people facing food insecurity.

The Security Council has issued several threats to impose an arms embargo on South Sudan, but Russia and China, both with veto powers, have questioned whether the move would make a difference. Russia’s deputy UN ambassador, Petr Iliichev, on Thursday reiterated that the U.S. recommendation would hardly be helpful in a country awash with weapons.

“Introducing targeted sanctions against South Sudanese leaders would be the height of irresponsibility now,” Iliichev said.

Last week, the UN special adviser on the prevention of genocide, Adama Dieng, warned South Sudan is at risk of an ethnic war and resulting genocide. During his visit, Dieng stopped at Yei, a once peaceful South Sudanese town. The resurging conflict in July and subsequent violence has left Yei at the center of warring armed groups. The South Sudan Protection Cluster estimated nearly 150,000 people have fled to Uganda from the Yei region, and some 120,000 others have moved to other parts of the country.

“I saw all the signs that ethnic hatred and targeting of civilians could evolve into genocide if something is not done now to stop it,” Dieng told the council following his visit.