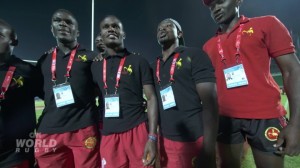 While they have never qualified for the World Cup, the national Rugby Union team known as the Cranes finds inspiration for their play with prayer and hymn-singing before and after each game.

“If I live a holy life, shun the wrong and do the right, I know the Lord will make a way for me,” the Cranes sing together.

Team manager Michael Wandera finds the singing uplifting. “In singing this hymn, the team recognizes that with God all things are possible,” he told CNN.

This has been one of the most successful years for the Cranes. The team qualified for the 2016-17 World Series by earning Africa’s rugby sevens title for the first time last September.

Uganda defeated Kenya, a highly regarded team, in the semifinals and then dismantled Namibia in the finals. Namibia has played in the previous four Rugby World Cup tournaments.

The Cranes are thinking ahead to April’s important Hong Kong Sevens, where they will be among the teams aiming to gain a qualifying spot for the 2017-18 World Series.

By honoring God and placing him first, He has opened up opportunities for the team. “This has really opened up big doors and windows for the young players back at home,” team captain Eric Kasiita told CNN.

Uganda’s “Rugby Cranes” also gained an important win over Japan — which reached the semifinals of the Rio 2016 Olympic men’s tournament in August.