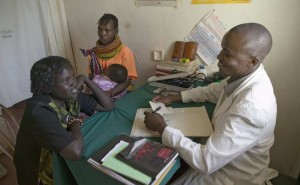 (NaturalNews) As news about Kenyan women being given tetanus vaccinations laced with a sterilization drug known to cause spontaneous abortions and infertility raises serious questions about race- and gender-based medical crimes, a series of boycotts and probes have broken out in the country in an effort to get to the heart of the matter. In the midst of it all, disagreement still exists, with several parties at a standstill as accusations regarding the vaccinations’ true intent continue.

On one side of the fence is Kenyan’s Health Ministry, who is administering the vaccinations. Along with them stands the World Health Organization (WHO) and UNICEF, developers and suppliers of the drug. Stirring the pot — thankfully — are people like Dr. Stephen Karanja, head of the Catholic Doctors Association, along with Dr. Muhame Ngare of the Mercy Medical Centre.

The doctors maintain that upwards of 2.3 million women are in the process of receiving tetanus vaccinations laced with human chorionic gonadotropin (HCG), a hormone that is produced during pregnancy and that produces antibodies when injected with tetanus, causing spontaneous abortions during later pregnancies. Because the Kenyan government has only been providing the vaccination to Kenyan women between the childbearing ages of 14 and 49, and not to women of other ages or to men, the vaccination is being eyed as a deceitful and shady move designed to control the population.(1,2)

The attempt to find answers amid “conflicting results”

“We sent six samples from around Kenya to laboratories in South Africa,” said Dr. Ngare. “They tested positive for the HCG antigen. They were all laced with HCG.” He added that “this WHO campaign is not about eradicating neonatal tetanus but a well-coordinated forceful population control mass sterilization exercise using a proven fertility regulating vaccine.”(2)

Interestingly, the WHO website outlines that, for a person to always be protected, they should receive a total of six tetanus shots in the form of both vaccinations and boosters throughout their life. In Kenya, five shots over a two-year period is recommended, something that is a significant, and eyebrow-raising, departure from the usual tetanus shot inoculation schedule protocol.(3)

Still, the Kenyan government is determined to demonstrate the safety and need of the vaccinations. As such, they’re coming down on the Catholic Church’s findings, recently ordering an independent inquiry to determine whether or not the vaccination is tainted with HCG. A committee comprised of government, Catholic and independent medial professionals was formed to check samples for evidence of HCG.

“We are at loss about who to believe since both sides have tabled conflicting results,” said Robert Pukose, the government MP who is vice-chairman of the National Assembly’s health committee. “That is why we need new tests conducted jointly for us to give final and conclusive results.”(1)

While the process is underway, results are anything but conclusive.

While Dr. Ngare says samples were found to be laced with HCG, the Health Ministry’s samples showed no finding of HCG. The government questions the manner in which the samples from the doctors were handled, contained and tested, while the Kenyan Catholic doctors are leery about the government, citing vaccination campaigns led by WHO in the 1990s in which tetanus vaccines were laced with HCG.(1,2) They maintain that the government’s efforts are shrouded in secrecy, while the Kenyan government, WHO and UNICEF say that such accusations are “grave allegations” that aren’t backed by evidence.(4)

In the meantime, women are urged to boycott the vaccination. Akello Misori, secretary general of the Kenya Union of Post Primary Education (Kuppet), is one such person. He explains that children provide job security and that women should not get tetanus shots. “A generation will come when we will not have children to teach,” he said. “We will, therefore, end up with no jobs.”(1)

As tensions continue to mount, Dr. Pukose made the seriousness of this issue extremely clear after he announced the joint investigations. He said, “Those found to have been misleading Kenyans, whether it is the experts advising the Catholic Church or the Ministry of Health, will be held individually accountable. Playing with the safety and health of Kenyans is a criminal matter.”(1)