(WNS)–The LGBT agenda is gaining traction at the United Nations, as the international organization prepares to vote on appointing an “independent expert” on preventing violence and discrimination.

The post, created in July by the UN’s Human Rights Council, will come before the General Assembly for a final vote in November.

The appointment will last three years, and the expert will “assess the implementation of existing international human rights instruments with regard to ways to overcome violence and discrimination against persons on the basis of their sexual orientation or gender identity, and to identify and address the root causes of violence and discrimination.” 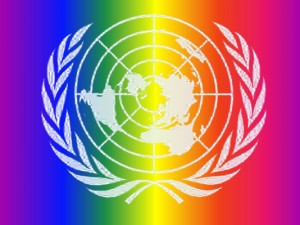 LGBT advocates applauded the move. Michel Sidibé, director of the UN agency focused on ending AIDS, said the position would be “critical for advancing the human rights and health of lesbian, gay, bisexual, transgender, and intersex people.”

But Stefano Gennarini, director of legal studies at the Catholic Family and Human Rights Institute (C-Fam), warned the position has nothing to do with protecting people from violence and “everything” to do with advancing global acceptance of homosexuality and transgenderism.

“We’re talking about a mandate to promote the acceptance of homosexuality, when the majority of religions in the world don’t teach that homosexuality is socially acceptable,” he told me. “They take violence and discrimination as a point of departure, but then they branch out into everything.”

In a 2015 report, the UN high commissioner for human rights bragged about the “positive developments” around the world since the world body began advocating for them in 2011: 14 countries introduced laws banning hate crimes against LGBT persons; 12 legalized same-sex marriage or civil unions; and 10 enacted laws to grant transgender people new identification cards.

Efforts to promote an LGBT agenda during the last decade have not gone unopposed. But Gennarini said UN bureaucrats have promoted their ideals by “evolving human rights standards.” The United States and other progressive nations have manipulated other countries’ delegates out of voting on LGBT issues, he added.

In March 2015, 70 delegates either abstained from voting or did not show up to vote on a decision to grant same-sex couples working at the UN the same benefits as heterosexual married couples. Russia’s delegate had moved to reverse the decision, but member nations passed the rule 80-43.

Only six countries abstained from the vote to appoint an LGBT expert, and the Human Rights Council passed the resolution 23-18. But debate was heated.

Members of the Organization of the Islamic Cooperation, with the exception of Albania, spoke strongly against the position. Nigeria’s delegate called the measure “divisive.” South African Ambassador Nozipho Mxakato-Diseko called the independent expert proposal “an arrogant approach,” and cited an African proverb: “If you want to walk fast, walk alone. If you want to walk far, walk with others. Grandstanding, recklessness, brinkmanship, and point-scoring will not get us anywhere.”

Gennarini said the most notable aspect of the new position is that member states—not UN bureaucrats—approved the position. Only strong-arming from the United States and European Union nations could enable such an unprecedented vote. Western pressure is silencing billions of people around the world because fewer than 60 countries have laws recognizing sexual orientation or gender identity, Gennarini said.

If approved, the independent expert will have all the UN bureaucracy’s resources to produce reports, launch investigations, demand information from member states, and take complaints from LGBT groups around the world.