(WNS)–Some 300,000 children around the world migrated alone in the past two years, a nearly five-fold increase since 2010, the United Nations child-welfare agency revealed in a report published May 17. The agency said the increasing trend has left many children vulnerable to smugglers and traffickers and called for a global protection system. 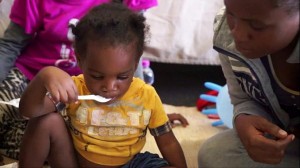 The children often leave home in search of work or educational opportunities. In some other cases, they migrate either to join family members who left ahead of them or to escape unwanted gender-based violence, the report said. Due to limited legal avenues, many children opt for illegal routes: Unaccompanied children made up 92 percent of the children who arrived in Italy through the Central Mediterranean Sea route from North Africa. During the long journey, some of the children end up in overcrowded or makeshift camps or live on the streets, according to the report. Others experience much worse.

“Ruthless smugglers and traffickers are exploiting their vulnerability for personal gain, helping children to cross borders, only to sell them into slavery and forced prostitution,” said Justin Forsyth, deputy executive director for UNICEF. “It is unconscionable that we are not adequately defending children from these predators.”

One migrant child named Aimamo told UNICEF smugglers forced him and his 16-year-old twin brother to work on a Libyan farm for two months to pay their fee. He said it felt like slavery: “If you try to run, they shoot you and you die. If you stop working they beat you.”

Mary, a 17-year-old girl from Nigeria, said a smuggler kept her for three months in Libya, where she was abused and trafficked. She eventually made it to Italy, but her smuggler continues to demand and threaten her for the rest of the money.

UNICEF said children’s rights should not be limited by borders or their legal status and called for a global agreement on the crisis. Among other things, the agency advocates for child-friendly procedures in welcoming migrating children and for improved efforts in identifying child traffickers. The report’s release comes ahead of a G7 summit next week in Italy, and the agency called on the seven countries to take action.

“These children need a real commitment from governments around the world to ensure their safety throughout their journeys,” Forsyth said.