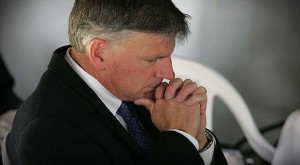 The enemy would like nothing more than to silence this mouthpiece for God who is confronting and pushing back darkness in our generation.

Billy Graham was a pastor to presidents and certainly addressed the moral slide in America as far back as the 1950s, but Franklin Graham seems to be wearing his dad’s mantle on steroids. (Photo: BGEA/Charisma News)

The once prodigal son is not shrinking back from hot button cultural and political issues… Why is Graham so bold? Because he sees an Islamic storm coming against America [and]… he has strong discernment and enough boldness to go toe-to-toe with the principalities and powers that have targeted Christians for destruction.

“For Muslims, peace comes only through submission to Islam. When they speak of peace, they mean submission to their religion,” Graham says. “Worldwide, tens of thousands of men, women and children have been slaughtered in the name of Allah, under the bloody flag of Islam.”

Men who practice a peaceful religion [he continued] do not detonate bombs on an American street during a marathon race to kill and maim innocent people. He said no one who belongs to a peaceful religion would even consider hijacking jet airliners and flying them into buildings occupied by thousands of innocent people beginning their workday, as happened in this country and in this city on 9/11.

Speaking to President Obama, he said, “Mr. President—no peaceful religion would tolerate, let alone practice, female circumcision, require a woman to have her husband’s permission to leave her home and take up employment and restrict her ability to receive justice in the case of sex crimes. Mr. President—a peaceful religion would not condone and allow a father to drown a daughter in a swimming pool in front of the family in the name of family honor because she might have stayed out late in the evening with her boyfriend. Mr. President—why haven’t the 3.5 million Muslims in North America rejected this gross, barbaric and despicable behavior by their fellow Muslims on American soil?” (Photo: BillyGraham.org)

IHOPKC’s Mike Bickle last month called for Believers to support and pray for Graham as he has “boldly yet tenderly taken a Biblical stance in warning America in relation to Islam, gay marriage and several other important subjects.”

I’m making an even more fervent call for intercessors to rise up and pray for Graham day and night. The enemy would like nothing more than to silence this mouthpiece for God who is confronting and pushing back darkness in our generation. Likewise, those who subscribe to anti-Christ agendas are raging against his voice. Saints, let’s make it a priority to lift up Graham in prayer, wage spiritual warfare against the attacks on his life and bless his ministry. Amen?