US Congressmen Detained and Searched After Temple Mount Visit 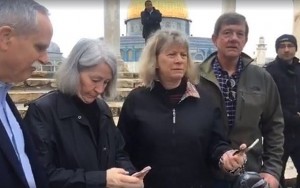 “But I am like a thriving olive tree in Hashem’s house; I trust in the faithfulness of Hashem forever and ever.” Psalms 52:10

Two US Congressman ascended the Temple Mount recently to “experience the site in the same manner as the Jews do,” and most definitely, they succeeded. Their visit ended in with a demand from the Temple Mount’s Waqf (Islamic Religious Trust) for the Israeli Police to search both of the congressmen, Republican Scott Tipton of Colorado and Republican David McKinley of West Virginia.

“The congressman said they wanted to experience the Temple Mount just like the Jews experience it and not like tourists,” tour-guide and filmmaker, Avi Abelow explained to Breaking Israel News.

Abelow, along with Rabbi Chaim Richman, the head of the Temple Institute, accompanied the congressmen who are on a week-long visit to the Jewish state that is being sponsored by the evangelical Christian organization, Proclaiming Justice to the Nations and a pro-Israel lobby group called, Yes to a Strong Israel.

“They joined our group of Jews and were herded around like cattle, just like the rest of us,” Abelow continued. “They saw how we are not allowed to spend time on our holy site.”

Abelow conjectured that the real reason for the Waqf’s ire was due to a misunderstanding that Congressman McKinley was bowing down in a worshipful manner. The current policy on the Temple Mount prohibits non-Muslims from praying on the site.

Alon Schvartzer, director of policy for Im Tirtzu, a Zionist nongovernmental organization, addressed the detention of the two US Congressmen in a statement.

“The situation on the Temple Mount has reached a new low,” Schvartzer said. “This is a disgraceful reality that has long crossed the point of absurdity, and we cannot allow it to continue.”

“Israel must remember that it has the sovereignty over the Temple Mount and not the Waqf,” he continued. “The time has come to provide freedom of worship to Jews, Christians and all those who wish to worship peacefully on the Temple Mount.”

Later in the afternoon, the congressmen sat down for a meeting with Israeli Prime Minister Benjamin Netanyahu.