The US Supreme Court has handed down a ruling denying Jerusalem as part of Israel, Israel National News reported. The decision, announced Monday, overturns a 2002 law requiring the State Department to recognize “Jerusalem, Israel” as a birthplace in passport listings. 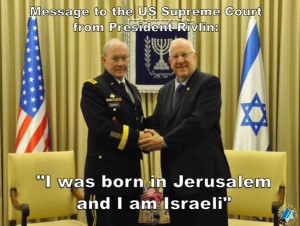 The case in question, Zivotofsky v. Kerry, has been bouncing around the US court system since 2004. Menachem Binyamin Zivotofsky was born in Jerusalem to two American parents in 2002. In 2004, they sued to have their son’s birthplace changed from simply “Jerusalem” to “Jerusalem, Israel” in accordance with the law passed by Congress just months before his birth. The matter came before the Supreme Court last year, after being rejected repeatedly by lower courts.

The Supreme Court ruled 6-3 against the Zivotofskys, criticizing Congress for “overstepping its bounds”, according to the National Journal.

Then-President George W. Bush, who signed the law in 2002, saw it as a recommendation and not legally binding. He argued it infringed on “the president’s constitutional authority to conduct the nation’s foreign affairs”, a stance which President Barack Obama echoes. The US government claimed in a brief to the Supreme Court that recognizing Jerusalem as part of Israel “would critically compromise the ability of the United States to work with Israelis, Palestinians and others in the region to further the peace process,” an indication of America’s intention to negotiate for a Palestinian capital in part of the holy city.

Chief Justice John Roberts was among the three who opposed the Supreme Court decision. He said of the ruling, “Today’s decision is a first: never before has this court accepted a president’s direct defiance of an act of Congress in the field of foreign affairs.”

Israel’s Immigration Absorption Minister Ze’ev Elkin (Likud), whose portfolio includes Jerusalem, responded to the decision by saying Jerusalem is the capital of the Jewish State and “will remain that for eternity.” He urged the US administration acknowledge “the simple fact that is a fundament of the Jewish heritage, and incidentally of Christian heritage as well – Jerusalem is the heart of the Land of Israel, and the eternal capital of the State of Israel!”

Deputy Defense Minister Rabbi Eli Ben-Dahan (Jewish Home), who lives in the southeastern Jerusalem neighborhood of Har Homa, had this to say: “United Jerusalem is the eternal capital of the Jewish people and the center of the world. This is how it was and how it will be.

“The Obama administration should express a clear position that Jerusalem is the capital of the state of Israel, especially in a period in which movements that negate the existence of the state are raising their heads,” he added.

Jerusalem was divided during the 1948 War of Independence, when the eastern half of the city, including the Temple Mount, fell into Jordanian hands. It was reunified by Israel in 1967, during the Six-Day War. Israel annexed the eastern part of the city and declared it the undivided capital of the Jewish State, but the move has yet to be recognized by the international community. The Palestinians claim at least East Jerusalem as the capital of their future state.