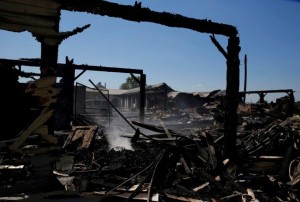 (NaturalNews) A U.S. Department of Agriculture (USDA) building that’s part of a facility specializing in genetic modification caught on fire Tuesday, September 6. Reports confirm that the blaze occurred one week after anonymous threats shut down USDA facilities in five states, including the agricultural research center in question, which is located in Beltsville, Maryland.

“Flames were shooting through the roof as firefighters arrived on scene and thick black smoke could be seen from miles away. Fire officials said they were alerted to what was first described as a shed fire by a call to 911 just before 10 a.m.,” reports Fox 5 News.

The timing caused some to speculate whether the fire was arson, possibly set by anti-GMO activists; however, the Bureau of Alcohol, Tobacco, Firearms and Explosives found no evidence to substantiate such claims.

Investigators found no evidence of criminal activity whatsoever, according to reports.

The damaged building is confirmed to house a number of workshops for the agricultural research center, which conducts research in a number of controversial fields, including the genetic modification of crops, animals and insects.

The facility says its mission is to “develop the knowledge and technology to improve genetic and reproductive traits, nutrient utilization and disease resistance in livestock and poultry to enhance growth, product quality and maintain superior genetics for economic gain.”

The facility studies “genes responsible for the uptake/utilization of nutrients and the impact of environment.” It also identifies natural immunity mechanisms in animals and host-pathogen interactions, among other things, according to the USDA website.

The agency says that several of its employees received anonymous threats, but declined to provide details regarding the nature of the threats. The USDA did say, however, that the threats drew concern about the safety of its employees and facilities.

Law enforcement in West Virginia provided some information about the threats, revealing it involved the intent to do harm to USDA employees.

“It’s a threat to do harm to people at the facility until the police arrive. They were going to break into the building,” said West Virginia’s Jefferson County sheriff, Pete Dougherty, in an interview with Reuters.

The research center had reportedly reopened just two days after the anonymous threats were made.

“A spokesman for the USDA said the facilities were shut down until additional security measures could be put in place but the nature of the threats were not revealed. FOX 5 reached out to USDA but have not heard back.”