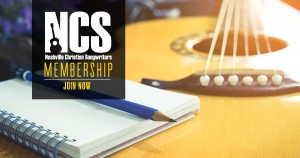 “I talk to a lot of people who say they’re disillusioned with Christian music,” Chisum says, “so I’m inviting them to stop complaining and go make a difference in it. We’ve gotten complacent and find it easier to complain about something than to change it, so my challenge is to write better songs and start creating new outlets for Christian music. That could be called a ‘song revolution, of sorts.'”

To date, the company has grown its Facebook presence through a closed group called Successful Christian Songwriters (over 4k members), its fan page with nearly 8k following, and a new podcast called The Song Revolution Podcast found on iTunes, SoundCloud, and YouTube with over 11,000 downloads since the podcast began April 1, 2017.

The company has also recently launched its own NCS MEMBERSHIP in hopes of empowering songwriters through its blogs, video resources, masterclasses, and additional monthly content.

“The conference is all about giving songwriters at all levels exactly what they need to fulfill their calling to write God’s story in fresh new ways. They think that they have songwriting dreams, but I believe they have no idea the enormity of God’s dreams for their songs,” Chisum says. “This conference will be filled with more than information. We’re going to watch as God ignites a whole new season of song power in the church from this thing.”

Chisum has spent the last three decades teaching worship leading and songwriting throughout the US and many parts of the world, including Africa, Asia, and the Caribbean.

“Empower Your Songwriting Dreams” will feature songwriter and industry panels, guest artists from the Nashville area, and breakouts on songwriting skills and tactics for being heard in today’s tech-driven world.