Zodhiates didn’t dispute helping Miller, a former lesbian embroiled in a bitter custody battle with her ex-partner, Janet Jenkins. But he insisted he was only trying to help a fellow Christian, not obstruct Jenkins’ parental rights.

Zodhiates faces up to eight years in prison when he is sentenced on Jan. 30. 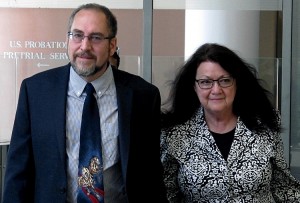 In this Sept. 22, 2016 photo, Virginia businessman Philip Zodhiates leaves U.S. District Court in Buffalo, N.Y., where he was on trial for international parental kidnapping and conspiracy. Zodhiates was convicted of the charges on Thursday, Sept. 29, 2016 after prosecutors say he helped a mother move her daughter out of the country and away from her ex-partner. (AP Photo/Carolyn Thompson)

Pastor Kenneth Miller may also face more jail time for refusing to testify against Zodhiates, a fellow Mennonite. U.S. District Judge Richard Arcara held Miller in contempt of court after he refused to answer questions during Zodhiates’ trial, despite being granted immunity.

“For reasons of faith and conscience, I am not answering,” Miller told prosecutor Paul Van De Graaf.

As the assistant U.S. attorney peppered him with questions on his whereabouts seven years ago and his connection with Zodhiates’ case, Miller continued to refuse to answer. Officials eventually escorted him from the courtroom.

Miller stood trial in 2012 for “aiding and abetting international parental kidnapping” and began serving a 27-month sentence in March. He was convicted for helping arrange Lisa Miller’s trip to Nicaragua with her daughter Isabella, then 7.

The two Millers are not related.

Lisa Miller decided to flee the country because she feared a family court judge would transfer custody of Isabella to Jenkins, which the judge eventually did. Jenkens and Miller entered a civil union in Vermont in 2000, and Miller conceived Isabella in 2002 by artificial insemination. The couple split in 2004, and Miller moved to Virginia and became a Christian.

Wanting to keep her daughter from Jenkens’ influence, Miller reached out to a local Mennonite community for help. Zodhiates drove Miller and Isabella to the Canadian border at Rainbow Bridge in New York on Sept. 22, 2009. They later hid among a Mennonite community in Nicaragua.

Authorities believe they are still there, and have tried unsuccessfully to locate them, despite threats and promises to the Mennonite community there.

This summer, after prison authorities denied his request to attend his daughter’s wedding, Miller re-iterated in a letter to friends that God’s law is higher than man’s.

“God’s design for marriage, family, and human sexuality stands as strong as ever,” he said. “Judicial rulings, government legislation, and personal choice may attempt to find alternatives to God’s created order. But all such attempts will ultimately be exposed for what they are—revolt against the Living God of Heaven—and will be judged as such.”