Flawed hypothesis attempts to explain how life began on Earth

(WNS)–Evolutionary scientists at McMaster University and the Max Planck Institute in Germany recently developed a theoretical model to explain how life began on Earth, according to them, some 3.7 billion to 4.5 billion years ago.

But Stephen Meyer, a geophysicist and director of Discovery Institute’s Center for Science and Culture, pointed out numerous holes in the so-called “warm little ponds theory.”

The theory, published in Proceedings of the National Academy of Sciences, claims that in Earth’s early days meteorites bombarded the planet and impregnated what Charles Darwin called warm little ponds with essential elements. The ponds supposedly formed when continents rose out of the global sea. Then the wet and dry cycles of the ponds caused the molecular building blocks in them to bond into RNA chains that folded over and spontaneously replicated themselves. According to the researchers, these imperfect chains improved through Darwinian evolution and eventually gave rise to the development of DNA, the genetic blueprint of higher life forms. 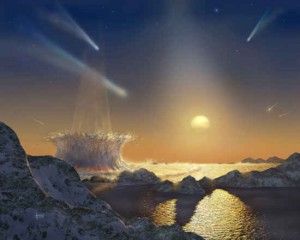 Meyer notes, as the researchers themselves admit, the warm little ponds likely harbored an environment hostile to nucleotides, the building blocks necessary to form RNA. Temperatures too high in the ponds would degrade the nucleotides, but colder temperatures would inhibit their generation. Seepage during wet periods, evaporation during dry periods, and chemical cross-reactions would have destroyed the nucleotides if they didn’t synthesize and bond within just a few wet-dry cycles. Also, the frequent impact of meteorites would have sterilized the surface of the Earth and vaporized the ponds.

The warm little ponds model does nothing, Meyer said, to explain how the RNA molecules developed the precise sequencing of genetic information necessary for life or how they developed the capability to self-duplicate. Scientists have successfully produced RNA molecules capable of copying small portions of themselves in the lab but only “after an intelligent chemist arranges the RNA bases in a very specific sequence,” Meyer said. “RNA self-replication depends upon pre-existing, unexplained sources of information.”

To get life going, RNA would have had to function like a modern protein, something it cannot do. Meyer likened it to asserting that a carpenter can build a house with only a hammer. Although the hammer can perform some carpentry functions, building a house requires many specialized tools. Likewise, RNA cannot perform all the necessary functions of a protein.

According to Meyer, the research study provides no explanation for the chemical pathway for forming RNA, “because no such pathway is known to exist.”