We warned Target this would happen…and it did 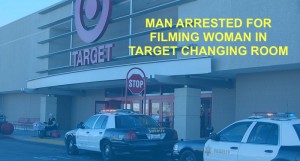 In April Target announced it would begin allowing men free access to the same restrooms and changing rooms as little girls. We immediately launched the boycott Target pledge which has garnered nearly 1.4 million signatures.

Since this boycott began we’ve seen multiple examples of why Target’s policy is dangerous. The most recent and startling example occurred in an Idaho Target store this week. According to East Idaho News, “an Idaho Falls man who police say identifies as transgender was arrested this past Tuesday afternoon after deputies say he took photos of a woman in a fitting room in Target.”

The man was booked at a local jail on one felony count of voyeurism. A woman told police that “a man, dressed in women’s clothing, had entered a fitting room in the women’s clothing section of the store.” Police say the suspect was seen taking photos of a woman in a stall next to him while she was changing. According to another witness, “The woman was begging for help as she chased the man out the door…” and “she kept saying she wanted those pictures deleted.”

Though he identified as a woman, the jail inmate roster lists him as a man.

This is exactly why we told Target that their store policy is dangerous. Target continues with its reckless policy.

As back-to-school shopping season nears, I’m asking your family to avoid shopping at Target stores…and to warn your friends about the danger Target presents to women and children.

Target’s lack of action on this issue has proven that their main concern is not the safety of their customers. Target management is more concerned with political correctness and pleasing the sexual deviants than protecting women and children.

Target is dependent on a large back-to-school sales season. By spending your money with their competitors, you are sending a strong message to Target that their policy is bad for business.