(NaturalNews) The Centers for Disease Control (CDC) has just added three new vaccines to the Childhood Immunization Schedule, bringing the total to an almost unbelievable 74 vaccine doses recommended before the age of 17. The agency also lowered the age of HPV (a sexually-transmitted virus) vaccination to include nine-year-olds. 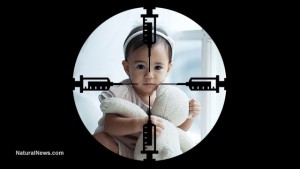 Since 1950, the number of required vaccine doses has risen from 3 to 74 – an increase of more than 24 times. In 1983, there were still only 10 recommended vaccines being administered to children under the age of 6 – the schedule then required 24 doses, 7 injections and 4 oral polio doses.

From The Healthy Home Economist:

“Predictably, children today are suffering from autoimmune disorders, behavioral problems, and physical disabilities at a rate growing in lockstep with the skyrocketing number of shots.

“One in every two children suffers from a chronic problem today and the situation is only growing worse with each passing year.”

A license to kill?

Many Americans are unaware of the fact that in 1986, a bill called the Vaccine Injury Act was passed into law. This Act absolves vaccine manufacturers from any liability for injury or death caused by vaccines. That’s right: If a vaccine injures or kills your child, the company which made the vaccine will not be held responsible.

Now it becomes clear why so many new vaccines have been added to the schedule, and why there are currently another 271 new vaccines awaiting approval by the FDA:

“The CDC will never stop adding to the immunization schedule as long as pharmaceutical manufacturers are protected from ALL liability of injury and death … There is absolutely no incentive to make existing or new vaccines safe or keep the schedule at a reasonable level since the passage of the 1986 Vaccine Injury Act.”

Are the risks worth taking?

For many parents, the health risks associated with vaccines are much worse than the risk of no vaccines at all, but Big Pharma lobbyists have deep pockets, and have managed to buy out the politicians in charge of drafting vaccine-related policies.

The anti-vaccine movement has been portrayed in the media as a bunch of paranoid lunatics who are endangering the lives of the rest of the population, when in fact the exact opposite is the reality.

Now, lawmakers are pushing for mandatory vaccinations so that the big drug companies can keep making huge profits without any regard for their safety or efficacy. This is happening despite a large (and continuously increasing) amount of evidence, that vaccines do cause serious health problems, and that many of them are ineffective in the first place.

Not only are many of these vaccines tainted and useless, but at least one of the major vaccine makers – Merck – has been caught falsifying efficacy data.

Isn’t it time to stop this madness before future generations are irreparably harmed due to the greed of the big drug companies?