(Christian Cinema) – In the first round of the Junior Preliminaries of the National Bible Bee Game Show, four young people challenged themselves and each other with the 183 Bible passages and 700 verses they had memorized. In front of a panel including former pro athlete and entrepreneur Jason Benham, former Bible Bee Game Show winner Hannah Leary, and Living Waters Ministries president Emeal (“E.Z.”) Zwayne, they worked to show what they had learned about the Bible in this week’s episode. 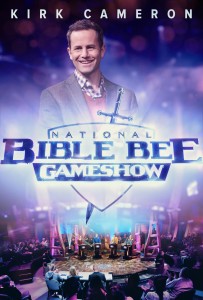 Initially, each of the contestants could earn points for buzzing in during Bible Knowledge Buzzer Round, choosing the correct multiple choice answer to questions like “According to Judges 16, how many years did Samson judge Israel in the days of the Philistines?” Catherine Chen jumped out to an early lead there, before all four of them shared what they had memorized by reciting short passages of Scripture. Diving back into multiple choice answers, the participants did their best to answer correctly, before the final combination of memorization and trivia round. Again this week, first place never seemed to be in doubt, but second was up for grabs until the final recitation.

Here is more about this week’s contestants:

Catherine Chen is from Villa Park, CA, and loves making crafts with anything she can get her hands on. She enjoys teaching math, geography, or history to others, including her siblings. Her favorite Bible verse is I Timothy 6:12. She says that Jesus and her mom are her role models.

Lydia Hoverson is from Burlington, ND, and enjoys walking around her farm. She writes music and plays the mandolin, but she wants to get better at checkers. Her favorite Scripture is Psalm 37:4 and she wants to reach children for Christ. David’s witness and care for Mephibosheth stand out to her as a Scriptural role model.

Thomas Bryan is from Thomasville, GA, and enjoys producing videos about the domino runs he builds on his channel TwistyTie. His favorite verse is John 4:14, and sees his pastor as a role model, because of his musical skills, preaching, and humor.

Annalise Van Der Wel is from Colorado Springs, CO, and is an artist at heart, whether it’s writing, drawing, singing, or playing her violin. She is in the process of writing her own book, but says Psalm 51:1-17 is her favorite portion of Scripture. She admires Lillian Thrasher who followed God wherever He sent her (including Egypt) and hopes to bravely go wherever she’s sent as well.

After the final scores were tabulated, Lydia Hoverson joined Catherine Chen in moving on to the semi-finals.