Recently, you have undoubtedly heard reports that Russia allegedly launched an attack on a hospital in Syria.

Turkey has now had the audacity to call Russia’s bombing campaign in Syria ‘barbaric’. Turkish PM Ahmet Davutoglu said: “Those vile, cruel and barbaric planes have made close to 8,000 sorties since September 30 without any discrimination between civilians and soldiers, or children and the elderly,”

Meanwhile, Turkey has been taking every opportunity to: bomb the Kurds who have been a key force fighting ISIS, launch illegal artillery strikes into Syria, work with ISIS to smuggle stolen oil across the Turkish-Syrian border, and, appear to be planning a war of aggression against Syria. 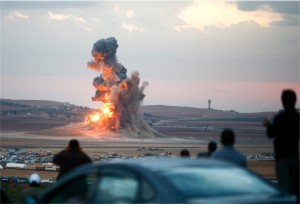 Of course, the Western mainstream media has picked up on this and continues to push the line that it must have been ‘either Russia or Syrian government forces [that] were responsible‘ for destroying the hospital, because of Russia’s ‘unrelenting aerial bombardment’.

Interestingly, these reports are all now occurring as it is emerging that Russia’s ‘unrelenting aerial bombardment’ is crushing ISIS into dust.

Russia has caused many jihadists to flee, destroyed the CIA’s arms smuggling operation into Syria, and now the Syrian Army has been able to capture the last defensive hilltop on the road to ISIS headquarters in Raqqa thanks to Russian assistance.

A spokesman from the Kremlin had this to say on the latest allegations against Russia’s real war on terror: “We vehemently reject such allegations, particularly because those making those statements have always proven to be unable to deliver any proof of their unfounded accusations.”

More doubts were cast after Russia claimed it was an American A-10, not a Russian fighter, that had launched an attack on a hospital.

All civilian deaths in war are a tragedy, but for the West to suddenly start claiming moral superiority is downright sickening and nothing less than a propagandizing reaction to Russia finally stopping the West’s foreign meddling in its tracks.

Finally, let us not forget that it was the West that started this conflict in the first place by supporting an army of terrorists trying to overthrow a sovereign government.