When Hollywood and Government Conspire

“[B]laming North Korea is the easy way out for a number of folks, including the security vendors and Sony management who are under the microscope,” writes Marc Rogers.

If you want an expert in cybersecurity, you can’t do better than Rogers: Among other accomplishments, he screens papers for presentation at the annual Def Con hacker conference. That’s a big deal.

If you’re skeptical about official government claims… and you possess a modicum of Web search skills… you can find dozens of experts like Rogers who aren’t nearly as certain as the FBI that North Korea’s to blame for the hacker attack on Sony.

Last Thursday, we expressed our own (decidedly nonexpert) skepticism. Not least because the original messages from the hackers said nothing about North Korea, or the Seth Rogen movie The Interview, about the assassination of North Korean leader Kim Jong Un. Only after the feds brought it up did the hackers latch onto that angle.

But this morning, we lay our skepticism aside and pose this question: Assume for the moment the North Korean government is responsible. What are we to make of it?

“When you poke somebody with a sharp stick, you get a response,” Byron King wrote his Military-Tech Alert readers on Friday.

“What Sony executives,” he wondered, “came up with the harebrained idea to make a movie about assassinating a named, identified, sitting foreign leader — let alone the leader of a nation that’s notoriously unpredictable and paranoid, like North Korea. Are Sony executives stupid? 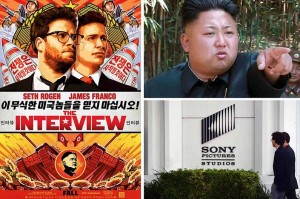 “Look at it this way. How would the ‘politically correct’ U.S. media react if a foreign filmmaker created a movie about assassinating President Obama? I don’t mean offing some generic, central-casting POTUS — a ‘President Smith’ or such. And what if, along the way, the movie script used all manner of insulting racial stereotypes in the name of being — ahem — ‘funny’? What movie chains would show such a movie? What newspapers would publish favorable reviews?

“In essence, Sony made a corporate decision to insult the Norks, and guess what? Sony’s computers got hacked. Yes, something bad happened — to Sony; not to anyone else, mind you. In the future, perhaps Sony should exercise better business judgment.

“Consider this, too,” said Byron: “Did the U.S. government ‘help’ Sony in any way by reviewing the script or such? Then shame on Uncle Sam. Hollywood is tawdry and juvenile enough without U.S. government assistance.”

Lost in the ridiculous media hoopla about the hack is a Daily Beast article about some of the leaked emails from Sony — emails far more important than what some midlevel executive dished about Angelina Jolie.

The emails reveal at least two U.S. government officials screened a rough cut of The Interview… and signed off on it, including a final scene of Kim Jong Un’s head exploding.

[Oops, did we throw in a spoiler? Well, finance is our beat, not movie reviews…]

“Emails between the Sony Entertainment CEO and a security consultant,” says the article, “even appear to suggest the U.S. government may support the notion that The Interview would be useful propaganda against the North Korean regime.”

For sure: CEO Michael Lynton bragged about corresponding with a “very senior” State Department official in an email to a consultant from the RAND Corporation — the nonprofit think tank joined at the hip with the government.

“In the larger picture, what does the Sony hack say about the U.S. electric grid?” Byron asks rhetorically. “Or air traffic control system?  “It’s no secret that the systems are vulnerable; more than most of the public really knows (or wants to know).