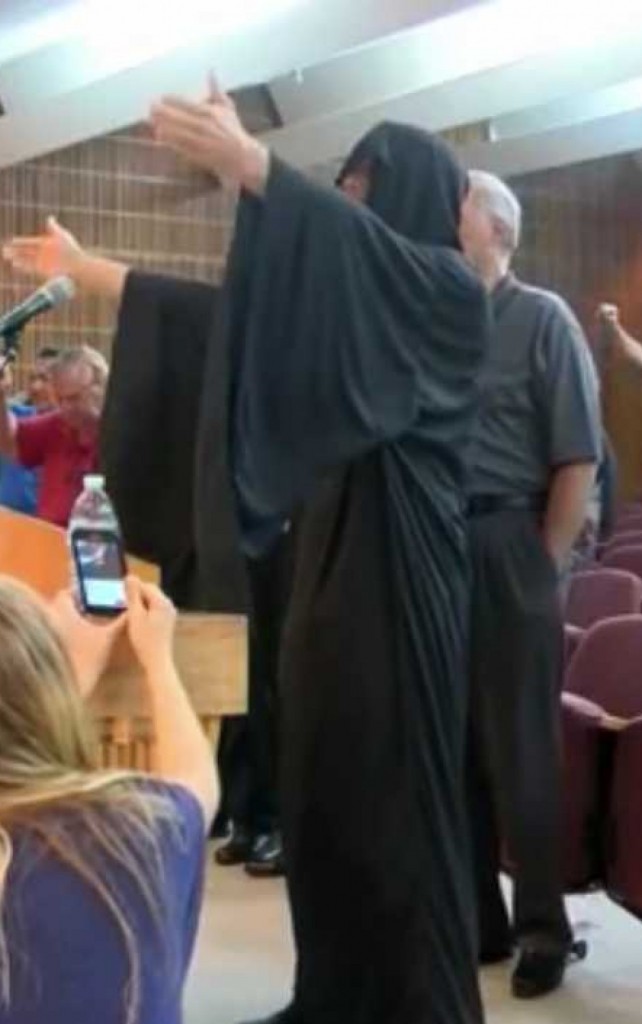 Gerald Wingate didn’t think a man in a cheap-looking Halloween costume would rattle him.  After four years as a Pensacola, Fla., city council member and another 25 as an Army officer, Wingate has seen his fair share of battles.

But as David Suhor, 48, the co-founder of the West Florida Chapter of the Satanic Temple, stood before lawmakers on Thursday and began his invocation — his pale face hooded and arms raised high like Darth Sidious in Star Wars — Wingate decided he had enough.

As Suhor called on lawmakers to “embrace the Luciferian impulse to eat of the tree of knowledge,” Wingate quietly exited the chamber, passing by anxious citizens holding crosses and reciting the Lord’s Prayer.

“You’ve got somebody who is worshiping Satan and who is coming in when the majority of us in this area serve God,” Wingate, who is Christian, told The Washington Post. “It wasn’t good for me to stand there and I got a little bit emotional. I was offended.”

As far as Suhor is concerned, that was largely the point.   For the past few years, he has made his presence felt at city and county government meetings around Pensacola by giving non-Christian invocations. His goal is to have religious services removed from local government meetings entirely, but he’d settle for “an inclusive moment of silence.” To highlight the injustice of sitting through a government-sanctioned religious message, Suhor gives invocations that draw from paganism, Satanism, Judaism, Islam and other religious traditions.

In Pensacola, a deeply religious community located 15 minutes from the Alabama border and home to one of the country’s largest Christian colleges, many people find his actions intolerable.

“The ones who have trouble with this are those that think their way is the only way,” Suhor told The Post. “When one group wants their message to be the only one and they try to enlist the agenda of the government, people get angry. True religious diversity means I don’t have to respect what you believe, but I’ll defend your right to believe it.”

Suhor has been sprinkled with holy water, surrounded by people speaking in tongues or trying to drown him out with fervent prayer. During a school board meeting in October, the invocation turned into a chaotic, 20-minute-long religious revival in which people screamed in tongues and tried to cast demons out of Suhor after he calmly recited a polytheistic message.

For the past six months, Suhor — who started a local chapter of the Satanic Temple earlier this year — has been attempting to perform the invocation before the Pensacola’s City Council in hopes that it will lead to a ban on prayer.

The tactic has worked before. In February, the Phoenix City Council banned public prayer instead of letting the Satanic Temple conduct a public invocation that would offend many.

Phoenix Mayor Greg Stanton and four members of the council voted for the change and argued that an effort to silence particular groups could land the city in an expensive legal battle.

“The First Amendment to the Constitution is not ambiguous on this issue,” Stanton said, according to the Republic newspaper. “Discriminating against faiths would violate the oath that all of us on this dais took. I personally take that very, very seriously.”

Gregory Lipper, a senior attorney at Americans United for Separation of Church and State, told The Post in February the mayor’s prediction is sound.

Lipper, who has represented the Satanic Temple in several legal battles, said that two years ago the Supreme Court held in Town of Greece v. Galloway that a community’s practice of beginning legislative sessions with prayers does not violate the First Amendment’s Establishment Clause.

However, Lipper said, although local governments can open meetings with prayers, those governments cannot control the content of those prayers unless they denigrate other faiths or include proselytizing. Much of the resistance to the Satanic Temple, he said, comes from people who think that the group is made up of devil worshipers, and they tend to unleash fierce opposition that wouldn’t hold up in a court of law.

“This is an issue that will come up in homogeneous communities when a member of a minority religion takes advantage of the invocation and it tends to generate a backlash,” Lipper told The Post. “Most local governments are used to a steady drumbeat of Christian clergy delivering Christian prayers. We’ve seen this same issue with Muslim prayer-givers and Wiccan prayer-givers around the country.

Contrary to the name, Satanic Temple members are non-theists who do not believe in the existence of the devil and promote the idea that religion can be divorced from superstition. On its website, the Satanic Temple describes its mission as encouraging “benevolence and empathy among all people.” Among the group’s seven tenets: “The freedoms of others should be respected, including the freedom to offend.”

“Our tenets are rational and we emphasize compassion,” Satanic Temple founder Lucien Greaves told The Post at the time. “Satan to us is metaphorical and represents a universal fight against tyranny and autocracy.”

The group has set off numerous headline-making free-speech debates in recent years by using provocative imagery. In 2014, it unveiled a proposal to place a Seven-foot Satanic statue in front of the Oklahoma state capitol, next to a statue of the Ten Commandments. 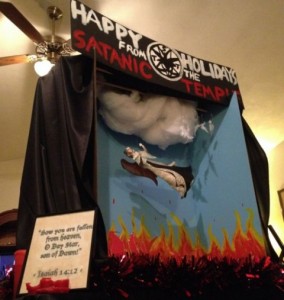 Later that year, after threatening a lawsuit, the Satanic Temple — in conjunction with Americans United — convinced Florida officials to allow the temple to move forward with a holiday display in the state capitol in Tallahassee that showed . The week-long display, which Florida officials had labeled “grossly offensive,” was placed in an area designated as an open forum for private speech.

In Pensacola, Suhor said, the City Council’s invocation is usually reserved for local ministers or members of the city staff. Last week, after six months of trying to get scheduled, Suhor finally got his chance. He dug up an old costume and practiced a routine that he documented on YouTube.

“I chose to wear it because this is a religious ritual and I thought it was appropriate garb — nothing fancy about it,” he told The Post.

Members of the local Methodist church filled the council chambers with prayer as Suhor approached the podium. After calling order, Council President Charles Bare instructed the crowd to quiet down and said he would be forced to empty the room if they didn’t comply.

“I would rather be in a room than let darkness sit here by itself,” one man yelled back. When the crowd refused to stop audibly praying, Pensacola Police began escorting people from the chamber. Suhor began singing a few moments later, prompting Wingate to leave the room in protest. 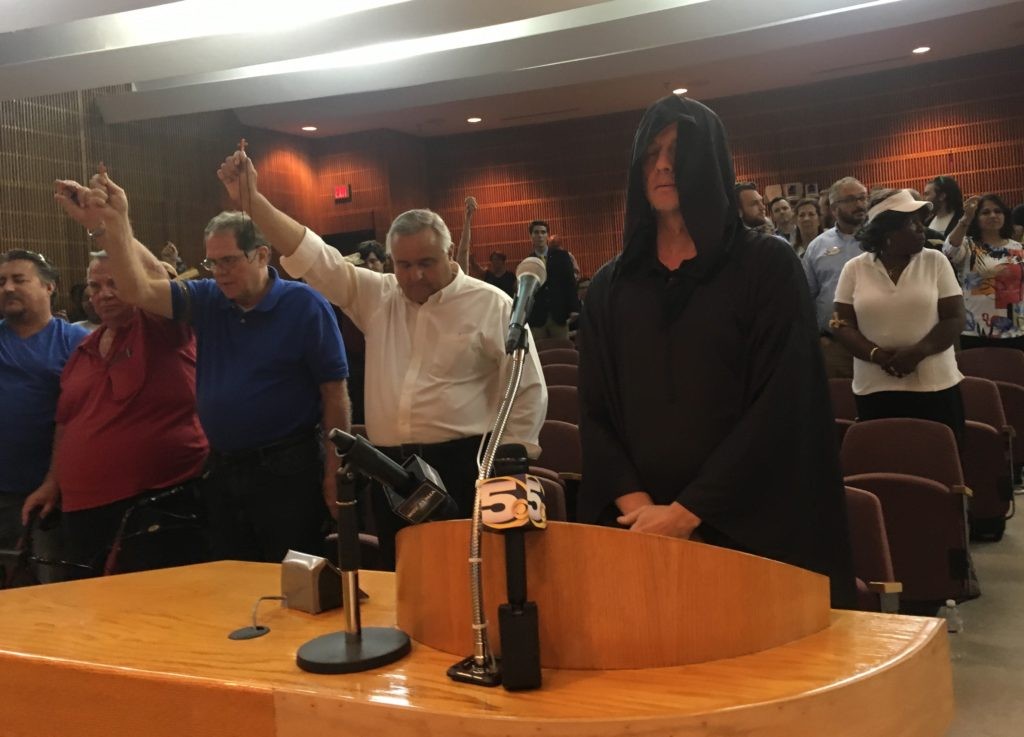 Afterward, several people in the crowd took to the podium to chastise the council for offering Suhor a chance to give the invocation.

“When you invoke a name, any other name under heaven that is not the Lord Jesus Christ, you almost invite cursing or disaster to fall on you,” Vickie Truett said, according to ABC affiliate WEAR-TV.

Suhor told The Post that he disagrees with Truett or anyone else who would “allow discrimination.” He called religious rituals outdated and “divisive” and a custom that people are “forced to grin and bear” if they want council members to take their concerns seriously.

“The purpose of it is to pander for votes and the net effect is that it creates religious privilege for one group,” he said. “Prayer is fine on your own time, but you don’t need to take government time to do it.”

He added: “I wonder how many of these people would tolerate week after week hearing calls to some supernatural being that they believe is bunk or — in my mind — pathological. I want people to understand how that feels.”