Why Ben Carson is right about Hillary and Lucifer 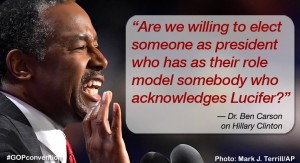 We’re hearing today from the political media – and even a few weak-kneed pastors – that it was “hate” for Ben Carson to associate Hillary with Lucifer via Saul Alinsky, as he did last night. This is partly because the political class and their media stenographers have no idea what to do with serious discussions of God, faith and the spiritual world as it really is. But it’s also the result of another phenomenon that’s unique to Hillary.

You might recall, if you ever took a history class or if you’re really old, that Harry Truman was nicknamed Give ‘Em Hell Harry – based on the bluntness of his expressions about any number of things. Asked about it once, Truman said, “I don’t give ‘em hell. I just tell the truth and they think it’s hell.”

So when Carson told the truth about Hillary last night, a lot of people were aghast. Surely he can’t be claiming she is in league with Lucifer! But yes. He was

Now think about this: Some months back, the white supremacist racist clod David Duke said he was for Donald Trump. Trump at no point expressed any positive feelings toward Duke, and in fact renounced his support on many occasions. Yet because Duke said he liked Trump, Trump was treated as guilty by association of everything awful about David Duke.

Now let’s consider the Hillary/Alinsky nexus. Hillary was not an unwitting recipient of Saul Alinsky’s praise, although there are reports that he knew about her and liked her. Hillary openly expressed her fondness for Alinsky and called him a mentor. And she has never renounced this statement. What’s more, it would be absurd for her to do so because her entire political career is a case study of someone who memorized Rules for Radicals and employed its principles for her own personal benefit.

So there is no way to claim that Hillary is not really an Alinsky follower. Of course she is. She’s said it herself, and never renounced it, and everything she’s ever done gives credence to her own declaration that the guy is her mentor.

Now, can Hillary be let off the hook for admiring someone who professed admiration for Lucifer? Can you argue that she “only likes his good points” or something else along those lines? Sort of like Marge Schott saying that Hitler was good in the beginning? No, you cannot, because Alinsky not only went out of his way to mention Lucifer as a role model of his own, but he unapologetically used the example of Lucifer to establish the methods contained in Rules for Radicals.

And there’s another reason you can’t let Hillary off the hook for this. In today’s modern culture, the secular left is doing everything it can to marginalize God and people of faith. Through advocacy of abortion. Through advocacy of gay marriage. Through advocacy of “transgenderism.” By sicking the IRS on pastors who dare to express political opinions (unless they’re liberal opinions, of course). And Hillary supports every one of these agendas without reservation. She even declared that longstanding religious beliefs will have to change to accommodate abortion.

Add that to her personal behavior of lying, constantly dissembling and abusing her access to governmental power for her own enrichment, and the picture couldn’t be more clear.

What Lucifer wants you to do is abandon your trust in God and His principles – including honesty, integrity, forthrightness and all forms of godly humility – and to become self-seeking and self-glorifying. What Lucifer knows is what you don’t, which is that traveling this path is nothing but darkness and spiritual destruction. But that’s the whole point. If he can deceive you to the point where you’ll travel down this path, he owns you.

If you can think of a human being that fits that description more completely than Hillary Clinton, I can’t imagine who that could be. And it should be no surprise at all. The man she calls a mentor admired Lucifer’s deception. Hillary learned from both of them and applied the things she learned to become rich, famous and powerful. And yet it’s still not enough for her. She still craves more power.

If you don’t understand that Ben Carson is right about this, the problem is that you’re unwilling to see it. It’s as plain as day for anyone with open eyes.