Why Do You Show Graphic Pictures?

I hope this doesn’t come across as self-serving, although I don’t apologize if it does. I just want to share with you a couple of stories from the past couple of weeks.

My wife and I love doing street ministry. In fact, as I heard a friend say the other day, it is much easier to make a Biblical defense for preaching outside of the church than it is for preaching inside one. My faith is never more alive and vibrant than when we are “earnestly contending for the faith” out where the wild beasts roam. 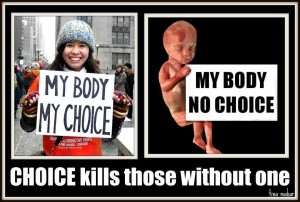 We believe that abortion is murder. That’s right…murder! The legal definition of murder is the premeditated killing of an INNOCENT human life. Nothing fits that description more than an unborn baby. Sadly, the most dangerous place in America for an unborn baby is inside the womb of his/her mother, while it should be the safest. They are the most defenseless of all human beings.

Unless, of course, you determine that they are not human beings. Dehumanizing others has always been the tactic of the God-haters in their quest to kill other humans. Blacks were once considered sub-human. Those killed in the Nazi-holocaust were classified as less-than-human. Fetuses are the current “useless eaters” that we permit to be slaughtered.

“Useless eaters.” That was a term popularized by eugenicist Margaret Sanger, the mother of Planned Parenthood. Anything (or anybody) that didn’t produce anything met that classification. Planned Parenthood, supported by your tax dollars, is the King of racists. To wit, although blacks are only 12% of the population, they make up nearly 37% of all abortions.

In New York City, a pregnant black woman is more likely to abort than to give birth.

We believe abortion is murder, and it is time to stop sugar-coating it. What kind of nation kills its preborn children? Our goal is to stop it. Not regulate it. Stop it! Murder should never be regulated. By the way, everything Hitler did was legal…at least in the eyes of the courts during his time. Courts and judges are becoming more and more evil. Judges legalized baby-murder in 1973 by ruling that the baby wasn’t a person. 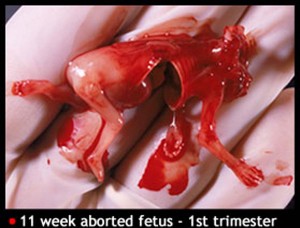 So, we show the pictures of the victims of abortion. I am sure you have seen them. We use these pictures when we minister on the streets. The pictures aren’t just graphic, they’re real. Abortion is graphic, and the pictures only reveal the graphic nature of the dismemberment.

The Left hates it. They want the victim to remain faceless and voiceless, so they rail against our use of the “graphic” pictures. They hate the pictures of abortion more than they hate abortion itself. But history is on our side. “A picture is worth a thousand words”, and we allow the pictures to be the voice of the victims. They are killed in secret, and we want to expose the killing.

The Civil rights movement changed when the television broadcasted images of German shepherds and water hoses being turned loose on blacks in the South. Eisenhower showed the pictures of mass graves in Europe to expose what the Nazi’s had done. The “don’t text and drive” folks are using graphic reenactment of car crashes to discourage kids (and me) from texting while driving. Just today I saw some graphic pictures of the Ebola outbreak. Make no mistake…the pictures work. Why are we so averse to showing the victims of abortion?

Sadly, many in the pro-life movement reject the use of the signs. Some groups will not work with us on the streets if we display them. They say the signs “traumatize” women and young children. Have you watched TV lately? It seems as if every popular show focuses on either death or sex. The TV producers know that graphic images work. They aren’t worried about “traumatizing” women and young children.

But just as importantly, we have enabled abortion to be a “victimless” crime by concealing the pictures of the victim. The picture permits the victim to cry out to the land.

I have two things to relate to you and then I am going to go back into the closet and hide.

Just this week my wife and I joined with our good friend Mark Harrington, director of www.createdequal.net, and took the pictures of abortion victims out to a busy street in front of a hospital here in Columbus. For two-hours we stood on the street corner and allowed the victims to speak. Here is a report from a woman ON HER WAY TO THE ABORTION CLINIC that Mark filed after our day was complete. 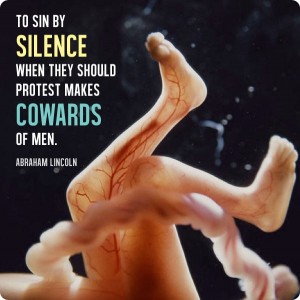 Columbus, OH – Aug 5, 2014 – “I just left the doctor’s office. I was heavily leaning toward it [abortion],” the pregnant mother told us last Friday, her eyes on our signs of abortion victims lining the street. Created Equal’s team was standing outside Mt. Carmel East in Columbus—a Catholic hospital which grants admitting privileges to abortionists—publicly exposing this hypocrisy when Deirdra pulled her car over on the side of the road to share her story.

Tears streaming from her eyes, Deirdra told us she would no longer consider killing her baby. After seeing the victims, abortion was no longer a viable alternative in Deirdra’s mind. It was an act of violence in which she wanted no part.

Just moments before, one Mt. Carmel doctor had approached Mark to declare that we were wasting our time; that our strategy wasn’t effective.

Deirdra disagreed. She finished by saying: “You are making a difference.”

How long will Christians continue to look the other way pretending a baby is not being killed? Right now, in a city near you, you can point to a building where legalized murder is taking place. There are more murders routinely taking place in “women’s health clinics” in America than any place in the world. Abortion is the ultimate “terrorism.” Planned Parenthood is tax-funded murder on steroids.

And we have people complain about the use of our signs???

The media has done everything they can to paint all pro-life activists as terrorists. The abortionists and those who support them are the real terrorists. They actually murder babies. We only show the pictures of their handiwork.

Please take 3 minutes, search online and watch “What is Operation Save America?” a powerful video created by 15 year old Charity Johnson. (WARNING: It may bring you to tears.) It shows the REAL FACE of the pro-life movement…Gentle Christians and their families fighting for Truth. We use pictures…because pictures make a difference.
If you feel led to help with our efforts, we would be grateful and honored to have you partner with us and support our work. We don’t just write about it. We don’t just talk about it. We don’t just pray about it.
WE WORK TO STOP IT!