Why hasn’t Charles Darwin been “canceled?”

In 1963, Martin Luther King Jr. delivered his famous “I have a dream” speech on the steps of the Lincoln Memorial in our nation’s capital. Thanks to his non-violent approach and his gift for oration, King—along with hundreds of others—led this country toward the American Civil Rights Movement and away from racism and desegregation. While no one would argue that the task of providing equal rights is complete, the landscape today reflects that numerous changes have occurred over the past fifty years.

By many aspects, it appears things are moving in the right direction. Racist signs and separate water fountains have been removed, and laws have been put into place to ensure equality. However, while changes have been made, and society appears to be moving collectively in the right direction, a silent current has been moving individuals in the opposite direction. This opposing current has a strong undertow, and will eventually be looked upon with disgust and repugnance. This racist tenet remains cloaked under the banner of evolution.

Now consider that this is the only legalized theory of human origins in public classrooms today. Students all across America are being shown images of dark skinned ape-like creatures that paved the way for white men. Ironic, is it not that the ACLU, an organization that is supposed to advocate “individual rights by litigating, legislating, and educating the public,” is defending a theory that undermines the core of their mission. The ACLU is defending an atheistic theory that by its very definition demands that there is an inferior race.

On college campuses all across this country Charles Darwin’s infamous Origin of Species has become a staple of required reading. But how many people are aware of the full title of Charles Darwin’s book? While new editions have deleted the subtitle, Darwin’s original work was titled: The Origin of Species by Means of Natural Selection—or The Preservation of Favoured Races in the Struggle for Life. The phrase “favored race” indicates that there is a race that is not favored. In his second book, The Descent of Man, Darwin noted:

At some future period, not very distant as measured by centuries, the civilized races of man will almost certainly exterminate and replace the savage races throughout the world…. The break between man and his nearest Allies will then be wider, for it will intervene between man in a more civilized state, as we may hope, even than the Caucasian, and some ape as low as the baboon, instead of as now between the Negro or Australian and the gorilla (2nd ed., New York: A. L. Burt Co., p. 178).

No rational man, cognizant of the facts, believes that the average Negro is the equal, still less the superior, of the white man. And if this be true, it is simply incredible that, when all his disabilities are removed, and our prognathous relative has a fair field and no favor, as well as no oppressor, he will be able to compete successfully with his bigger-brained and smaller-jawed rival, in a contest which is to be carried out on by thoughts and not by bites (Lay Sermans, Addresses and Reviews, New York: Appleton, 1871, p. 20).

Racism and the church

But not all of the blame is to be laid at the feet of the school system or even the mainstream media that continually promotes atheism and evolutionism. Some of that blame is laying on the footsteps of the church today. We have been woefully inadequate at teaching our children the Truth regarding skin color.

There is no question that the Bible teaches there is only one race—the human race. God created mankind in His image and in His likeness. We were the pinnacle of His creative activities. The Bible clearly states that all of the lineage of humanity came through one woman, Eve. She is defined as the “mother of all living” (Genesis 3:20). But do we really believe that?

While congregations would argue that they are not racist, the fact remains most congregations remain segregated. While we preach about diversity and everyone having a special role in the body of Christ, we do not promote or celebrate diversity—because for many it is not comfortable. Pulpits herald messages about loving all people, but dark hallways echo the sounds of racial slurs and jokes. We use terms like “brothers and sisters in the faith,” but many treat individuals of different color like “step-families.”

How many times have conversations been started in which a Christians says, “I’m not racist, but…” But what?! How many times have “faithful Christians” of one color uttered hateful generalizations against people of a different color? Do we secretly believe (or hope) that there will be a heaven for each individual race? As sad as it is, I think an honest evaluation of the church reveals we are still struggling with race relations. I am afraid many have forgotten that God is the Creator of Jews and Gentiles. Christ is the Savior of blacks, whites, and everyone else.

If we are going to purify the hearts of our children and grandchildren we need to stop playing the blame game and start actively teaching them the biblical perspective that there really is only one race. Soberly ask yourself: If your child could marry a very faithful Christian of a different color or a very rich non-Christian of the same color which would you prefer? Yes, there might be some added difficulties in rearing “mixed” children in a society that does not truly embrace diversity. But ultimately which is more important—making it to heaven or buying a beautiful earthly haven?

Could we have all come from Adam and Eve? 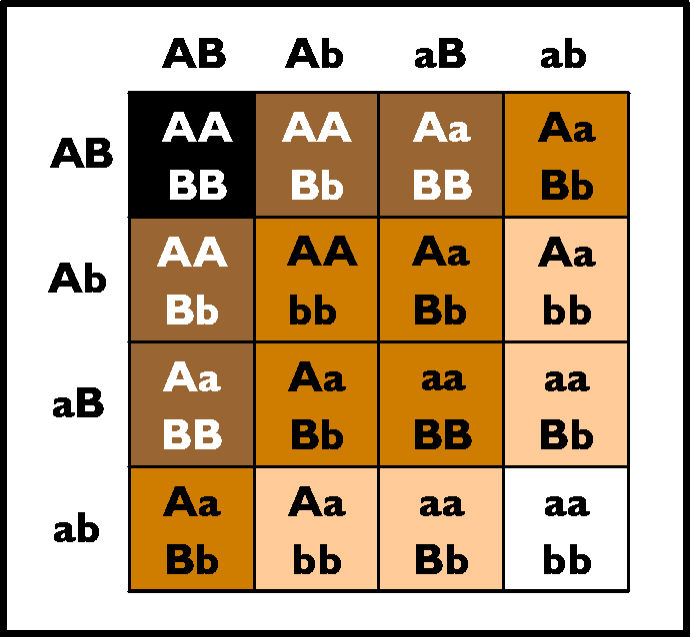 The human genome project demonstrated different populations of humans share 99.9% similar genetic content. We know today that skin color is caused by a biological pigment known as melanin. The amount of melanin in the skin is determined by the genetic endowment of our parents. Knowing this, geneticists have come along and used special letter combinations to designate how much melanin someone has in their skin (e.g., AABB). For instance, a capital “A” and “B” indicate dominant genes— which can produce large quantities of melanin. Whereas a small “a” and “b” indicate recessive genes —which are unable to produce quite as much melanin. Thus, the designation AABB = darkest skin possible, and aabb = lightest skin possible. (See Chart )

Using this information, we can build a punnet square to tell us the “genes” (and color) of the offspring. So is it possible to take two people (say Adam and Eve) and explain all of the beautiful colors we see around us today?

However, if God had created Adam and Eve with a mixture (AaBb), say a beautiful “mocha” color, you would get a host of varieties (see chart below).

We can get all of these possibilities from just two individuals. And yet eight walked off of Noah’s ark. Is it possible to explain the rainbow of colors we see around us today using God’s Word? Definitely!