MOUNT HERMON, CA (ANS) – A nation too-often tarnished by racial conflict could use an inspiring film like this.

When I learned this movie involved Tony Nathan, I perked up.  As a longtime Miami Dolphins follower, I knew of his NFL exploits.  But I was unaware of his Woodlawn High School days in Birmingham, Alabama, and the poignant story of how football and faith helped bring harmony among racial enemies.

Three months later, in his “Letter from a Birmingham Jail,” Martin Luther King, Jr., had written, “…racial injustice engulfs this community.  Birmingham is probably the most thoroughly segregated city in the United States.” 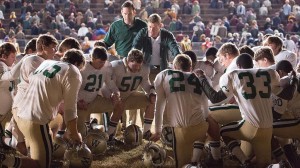 Now, in 1973, Tony and other African American students find themselves bused to predominantly-white public schools, becoming the objects of derision and harassment.  Woodlawn football players who didn’t want to be teammates were thrown together.

Enter Hank a sports ministry worker who had experienced a spiritual transformation at Explo ’72, a Christian convention in Dallas that drew 80,000 people.  He was especially impressed by an evening session in the Cotton Bowl, where all attendees had small candles.

Billy Graham lit a candle, then passed the flame to another.  The flame spread until the stadium was ablaze with candlelight.  The event helped reinforce to Hank his own significance in God’s eyes.

In the film, Hank (Sean Astin, Lord of the Rings trilogy, Rudy) persuades Woodlawn’s football coach Tandy Gerelds to let him speak to the team.  He tells the team God can make a difference in their lives and invites them to place their faith in Jesus.  Over forty players take him up, and division gradually morphs into unity.  The team plays with fresh purpose and camaraderie. 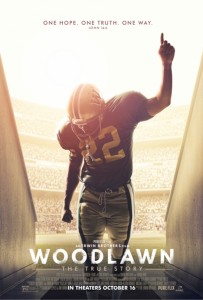 Gerelds, a skeptic, observes this transformation and trusts Christ himself.  The real Tandy Gerelds later wrote of that decision, “The Lord came into my life…and gave me what He gave the players: love.”

The spiritual spark spreads as students gather on campus for spontaneous interracial prayer for their school and city.  Players adopt the symbol and slogan of the era’s Jesus Movement – a raised forefinger signifying “One Way!”  The slogan derives from Jesus’ statement, “I am the way, the truth, and the life. No one can come to the Father except through me.”