World Premiere of ‘Apokalypsis: The Final Warning’ Has Everything You Need to Know About the End Times 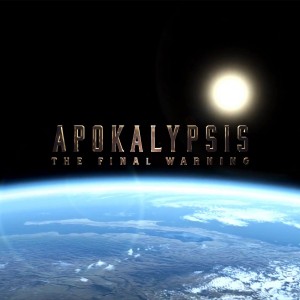 In this four-part docuseries Apokalypsis: The Final Warning, many Bible experts, including Dr. Ed Hindson, evangelist Donald Perkins and Dr. David Reagan, explore coming events of the last days and unlock mysteries every believer should know and understand.

Produced by Inspiration Ministries, this amazing television event will answer some of the most-asked questions about the book of Revelation: What are the signs that we are living in the last days? Will there be a rapture when born-again Christians are suddenly taken to heaven? Why is Israel so pivotal to end-time events and God’s prophetic timetable?

“In one sense, we’re already living in the last days but are we in the last of the last days? That’s the question,” said Dr. Ed Hindson, dean of the School of Divinity and distinguished professor of religion at Liberty University. “If you’re not willing to live for Jesus, you’re sure not going to be willing to die for him. This television special event is a ‘must-see’ for every believer.”

“Some of the questions this amazing television event answers are: What roles do America, Europe and Russia play in the end times? What is the mark of the beast, and what will happen to those who receive it? What is Armageddon? What will bring it about?” says David Cerullo, the chairman and CEO of Inspiration Ministries.

“tvChaz.com is proud to partner with Inspiration to bring Apokalypsis: The Final Warning to new audiences through this new multimedia platform,” says Ossie Mills, president and CEO of tvChaz.com. “This brilliantly produced docuseries is now available for the first time on an on-demand, pay-per-view basis exclusively on tvChaz.com worldwide.”

Produced with state-of-the-art techniques by award-winning executive producer Rudy Landa, this special was 18 months in the making and carries with it the amazing message of the book of Revelation. “It was an honor and a privilege to tell this story of this last book of the Bible with such clarity and in such high quality,” Landa says.

Here are what some of the featured experts appearing in Apokalypsis: The Final Warning have to say:

We call all of this God’s major prophetic time clock. Prophecy is not meant to scare us, it’s meant to prepare us. Paul called it a mystery. This special explores this concept of the rapture. The Scripture says that the dead in Christ shall rise first and then we which are alive and remain shall be caught up with Him and will be changed from mortal to immortality.

Ron Rhodes, Ph.D. in theology, president of Reasoning from the Scriptures Ministries:

This docuseries explores the meaning of the fig tree. In the book of Hosea God calls Israel His fig tree. Jesus spoke those words and He said that ‘this generation shall not pass away until all of these things would be fulfilled.’ Jesus said there would be a generation that would see the signs of life on the fig tree; Israel. And the generation that saw that, would not pass away. Israel’s regathering the land is the game changer of all time, because that means the final days have begun.

Apokalypsis uncovers the Ezekiel invasion. You shouldn’t be surprised when this invasion takes place with Russia joining up with Turkey and Iran and Sudan and Libya and a number of other Muslim nations. It’s going to happen! If mankind would repent, God would relent!

This is an unprecedented time of wars and rumors of war. Plus, in addition to that, we have terrorism now. As we premier this docuseries, the bombs are falling in Israel.