MOUNT HERMON, CA (ANS) – OK.  You’re a twenty-something single mom, a recovering drug addict.  At 2:00 a.m., you’re exhausted from moving into your new apartment.  You’ve heard an escaped killer’s on the loose, but that he’s probably in the next state by now.  Suddenly, he’s on your doorstep, holding a gun in your face, shoving you inside. 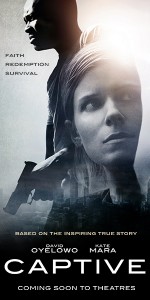 That was Ashley Smith on March 12, 2005.  What transpired during the next seven hours in Atlanta captured a nation’s heart as two broken, wounded souls navigated a risky journey about purpose, survival, faith and redemption.

The previous day, accused rapist Brian Nichols had shot and killed a judge, court reporter, sheriff’s deputy, and federal agent.  Now he needed some rest.  Ashley needed to stay clean to regain custody of her young daughter, Paige. But would she survive the night?

Paramount brings this drama to the big screen in Captive, with David Oyelowo (Selma) as Brian and Kate Mara (Fantastic Four, House of Cards) as Ashley.  Brian Bird wrote the screenplay, based on Ashley’s book, Unlikely Angel.

Family conflict underscored Ashley’s descent from preppie basketball player to drug addict.  In high school, she smoked pot before games, claiming it improved her scoring.  She shoplifted to support a cocaine craving.  Her mother and stepfather threw her out of the house.

As a young mother, her husband’s murder sent her into a tailspin.  She became hooked on crystal meth (ice), used it regularly, became paranoid, spent time in jail and a mental hospital, and lost custody of Paige.

Recovery programs helped, as did The Purpose Driven Life, a book by popular pastor Rick Warren that she obtained at church.  A dollar bill she’d used to snort meth became her offering-plate donation for the book.  Alas, relapses continued.  Then Brian Nichols showed up.

Ashley’s strategy to preserve her life and get Brian to surrender is textbook Emotional Intelligence.  She tries “to feel his feelings … connect with him and gain his trust,” she explained in her book.  He seems to her like a “lonely, hurt little boy” as he relates his relationship pain and longing for his son.  Ashley tells him of her own struggles, jail, losing her husband, longing for Paige.

They speak of their faith journeys as born-again Christians – wounded and strayed.  She fixes him pancakes, shows him family pictures. 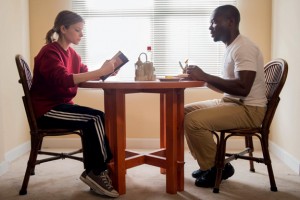 Brian asks for drugs.  She offers him ice, but refuses to partake herself.  That refusal is a defining moment in her life, she feels.  Not wanting death that would orphan Paige, Ashley decides God has brought Brian to jolt her into quitting drugs for good.

Brian asks her to read aloud from The Purpose Driven Life.  He speculates that her purpose is to relate her experience to others, and asks what she thinks his purpose is.  She suggests it’s ministering to other prisoners.  She encourages him to take responsibility for his actions as she has done, to ask God’s forgiveness, to make good decisions, and to turn himself in to prevent more violence.

Sensing his fear and despair, Ashley mentions a Bible verse that’s given her hope and courage to do the right thing:  “I can do all things through Christ who strengthens me.”

At one point, Brian muses, “Maybe you’re my angel sent from God.  Maybe that’s what this is.  Maybe he led me right to you.”

Perhaps you remember “the rest of the story,” which this film skillfully portrays.  Captive is both enthralling cinema and a powerful reminder that God can use broken people and unlikely circumstances to bring genuine good.  Perchance it will inspire you as it did me.