For nearly a century, 103-year-old Genora Hamm Biggs has attended the Union Grove Baptist Church in Georgia — even working as the church’s secretary for some 40 years.

But Biggs — a parishioner since she was 11 years old — was banned last month from attending after she disagreed with the church’s pastor over his preaching style, Fox affiliate WAGA-TV reported. 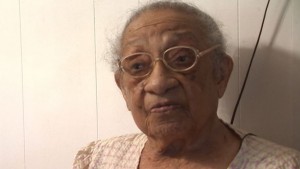 On Sunday, law enforcement was called to the small, white church in Elberton, Ga., after Biggs decided to attend service anyway, according to the station. Police said there was nothing they could do because the matter is a civil dispute between Biggs and the church.

Biggs told the station that she and the current pastor of six years, Rev. Tim Mattox, have long sparred over his preaching style, which she characterizes as a “Holiness style” that she claims doesn’t belong in the Baptist church.

“At one point, he had a crew in here and they were hollering and falling out in the middle of the floor,” Biggs told the station. “We don’t do that in the Baptist Church.”

Biggs said tensions came to a head in early August when Mattox sent her a letter stating she could no longer attend church there “for any reason whatsoever,” the station reported.

“This letter is to inform you that according to the By-Laws of the Union Grove Baptist Church, and by vote of the active members, any membership or associations that you have had with this church are now officially revoked,” read the letter, dated Aug. 2.

Biggs, meanwhile, said nothing will stop her from attending the church. “This is my church, I love this church, and he cannot stop me from going,” Biggs told the station.