The Republican Debate lived up to all of the hype and garnered FOX News yet another ratings bonanza. That said I only have one real take away from the seemingly very early exchange.

Firstly, all in both formats sounded practiced and polished with the notable exceptions of Graham and Perry. Trump was predictable while Cruz and Huckabee were determined to make their case early and often. Bush seemed scripted and Pataki sounded confused and out of his league. Oh, and I did like Fiorina. She’s one very intelligent and well-spoken professional. There was one very noticeable breath of fresh air however. 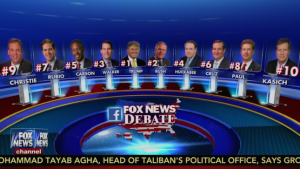 When he was finally asked some questions by the FOX moderators, Dr. Benjamin Solomon Carson appeared amazingly at ease. A bit tentative at first, Carson moved quickly to make the case for civility and common sense in an age when both are in obvious short supply. His practical and factual answers on race, taxes and foreign policy began in quiet reserve and ended with powerful and irrefutable messages. Carson’s hands-on, (or in) if you will, experience dealing with human kind, when combined with his rock-solid Christian faith, give him a unique big-picture perspective. In his closing remarks on Wednesday the renowned pediatric neurosurgeon subtly reminded us that it’s not the practiced politicians and one arrogant business tycoon up on stage with him, nor the ideologically driven president in the White House, but rather “We the People” who will ultimately pick up the “baton of freedom” and hand it off to our children.

Ben Carson has consistently made the case and I agree, that only when we resist the coffee house and water fountain politics of the day, and truly make an effort to educate ourselves as to the very basic but undeniable tenets of this “great experiment”, and only when we get back to faith, family and freedom first, may we begin to chart a course back to the opportunity and promise of the American Dream. Anything short of this will simply be more of the same.