“Cry yet, saying, Thus saith the Lord of hosts; My cities through prosperity shall yet be spread abroad; and the Lord shall yet comfort Zion, and shall yet choose Jerusalem.” Zechariah 1:17

The walls at the Tower of David Museum’s Kishle exhibit can talk. They uncover thousands of years of archaeological evidence pointing to layers of Jewish continuity in Israel’s eternal capital of Jerusalem.

Nearly 20 years ago, archaeologists believed that Kishle was built in 1834 by Ibrahim Pasha, an Egyptian ruler, as its remains indeed featured bars of an abandoned prison, built by the Ottomans and used by the British to imprison resistance fighters struggling to establish a Jewish state.

Thus, the Kishle was slated for $1 million of renovations to create a new space for children’s activities and a multipurpose space for temporary exhibitions and lectures. 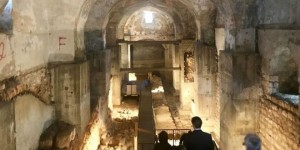 But soon archaeologists found much more than etchings and bars: they uncovered ancient fortifications that tell the story of Jewish Jerusalem long before modern days. Under the Kishle’s narrow 450-meter roof, findings verify Biblical narratives.

As archaeologists began to dig down by hand, they uncovered layers of Jerusalem’s 4,000 year history, showing the continuum of the Jewish presence in Jerusalem for at least 2,700 years and creating a timeline that spans Jerusalem’s history, with major significance to Jews and Christians.

The money was instead directed toward further excavations and at the lowest layer of the Kishle, archaeologists found a fortification wall, built by King Hezekiah, one of the Kings of Judea from the First Temple Period, 8 century BC. These walls shed light onto the location of Jerusalem’s western boundary in the First Temple Period, as well as the size and dimensions of Biblical Jerusalem.

Above these walls, archaeologists found the remains of Hasmonean walls built 600 years later by the Hasmoneans who ruled Jerusalem after the Maccabean revolt and before King Herod, who built the Second Temple.

Even further above, archaeologists found the very foundations of the magnificent palace of King Herod, built in the 1st century BC, during the Second Temple period. Many believe the palace may have served as the Praetorium, the site of Jesus’ trial by Pontius Pilate, along the original route of the Via Dolorosa that Jesus followed to his crucifixion.

After pulling up the floorboards, archeologists descended 33 feet and found continual layers of Jerusalem’s history. They found medieval dying vats that stood at the foot of the Tower of David, as seen and recorded in the diary of Jewish traveler and Rabbi, Benjamin Metudela in 1165. They also discovered the remains of an 11th Century cloth-dying and leather-tanning factory, demonstrating Jewish life in Jerusalem during the Crusader period, also described by medieval Jewish scholars Nahmanides and Benjamin Metudela. 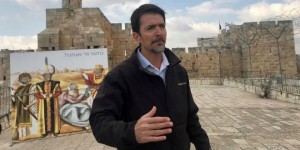 Amit Re’em, Jerusalem’s Chief Archaeologist at the Israel Antiquities Authority, standing on top of the Kishle Exhibit at the Tower of David (Photo credit: Eliana Rudee)

Other finds include a Jewish ritual bath (mikveh) from the Second Temple period that likely stood inside a large Hasmonean palace, connected to the system of water reservoirs, hewn and preserved into the rock, as well as a quarried water tunnel that stretches from beneath the structure to Herod’s Pool outside the city walls, used as an escape route for the Temple’s Jewish priests upon Roman destruction of Jerusalem.

According to Eilat Lieber, director of the Tower of David Museum, the Kishle excavations, which “tell the full story of Jewish continuity in Jerusalem from the days of the Judean King, Hezekiah, close to 3000 years ago, and through history up until the very struggle for the independence of the Jewish State,” are especially important “in a time when voices are being heard that deny the connection between Jerusalem and the Jewish people.”

But the Kishle also tells the story of modern Israel. According to Professor (Emeritus) at the University of Haifa Ronny Reich, Kishle is “considered a national monument” because of graffiti etchings from Irgun (Etzel) inmates who were held in prison during the beginnings of the fight for Jewish resistance in the holy land, including a map of Israel and the Star of David. The Irgun emblem is also etched in the walls of the cell that held Shmuel Matza, who later returned to the prison for an emotional visit after it was uncovered in the early 2000s.

In the context of these finds, Amit Re’em, the current chief archaeologist at the Israel Antiquities Authority, as well as the archaeologist who led the 1999 dig of the site, said, “The Kishle excavations give us a rare glimpse into Jerusalem’s past and enable us to understand the historical sequence in Jerusalem through archaeology.”

Reich lauded the excavations under the floor of the Kishle building as a “unique phenomenon, not found in the other archeological sites in Jerusalem which are open to the public.”

“Several sites show remains from ancient Jerusalem, but each one shows only a limited chapter of the city’s history,” Reich said. “The excavations carried out under the floor of the Kishle building, and which descend considerable depths, give the longest sequence of strata, from the 19th century down to the 8th century BCE.”