After 20 years of battling Monsanto and corporate agribusiness, food and farm activists in Vermont, backed by a growing Movement across the country, are on the verge of a monumental victory—mandatory labels on genetically engineered foods and a ban on the routine industry practice of labeling GMO-tainted foods as “natural.”

On April 16, 2014, the Vermont Senate passed H.112 by a vote of 28-2, following up on the passage of a similar bill in the Vermont House last year. The legislation, which requires all GMO foods sold in Vermont to be labeled by July 1, 2016, will now pass through a House/Senate conference committee before landing on Governor Peter Shumlin’s desk, for final approval.

Strictly speaking, Vermont’s H.112 applies only to Vermont. But it will have the same impact on the marketplace as a federal law. Because national food and beverage companies and supermarkets will not likely risk the ire of their customers by admitting that many of the foods and brands they are selling in Vermont are genetically engineered, and deceptively labeled as “natural” or “all natural”; while simultaneously 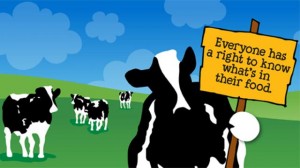 trying to conceal this fact in the other 49 states and North American markets. As a seed executive for Monsanto admitted 20 years ago, “If you put a label on genetically engineered food you might as well put a skull and crossbones on it.”

Proof of this “skull and crossbones” effect is evident in the European Union, where mandatory labeling, in effect since 1997, has all but driven genetically engineered foods and crops off the market. The only significant remaining GMOs in Europe today are imported grains (corn, soy, canola, cotton seed) primarily from the U.S., Canada, Brazil, and Argentina. These grains are used for animal feed, hidden from public view by the fact that meat, dairy and eggs derived from animals fed GMOs do not yet have to be labeled in the EU.

Given the imminent passage of the Vermont legislation and the growing strength of America’s anti-GMO and pro-organic Movement, the Gene Giants—Monsanto, Dow, DuPont, Bayer, BASF, and Syngenta—and the Grocery Manufacturers Association (GMA), representing Big Food, find themselves in a difficult position. Early polls indicate that Oregon voters will likely pass a ballot initiative on Nov. 4, 2014, to require mandatory labeling of GMOs in Oregon. Meanwhile, momentum for labeling continues to gather speed in other states as well.

Connecticut and Maine have already passed GMO labeling laws, but these laws contain “trigger” clauses, which prevent them from going into effect until other states mandate labeling as well. Vermont’s law does not contain a “trigger” clause. As soon as the governor signs it, it will have the force of law.