A Matter of Trust

A Wisconsin Couple Steps Out in Faith, Bringing Hope and Change to South Sudan 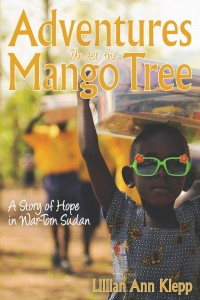 Adventures Under the Mango Tree: A Story of Hope in War Torn Sudan

If you were to ask God how to best be of service in a troubled world and the answer you received was to “Sell all you have and give it to the poor”, could you – would you – do it? Could you really sell everything you own, leave your home and well-established life behind, and travel halfway around the world to live in a country best known for its civil wars and extreme poverty?? Most of us, in all probability, could or would not. But that wasn’t the case for Dennis and Lillian Klepp, a Wisconsin couple who asked the question, received the answer and then stepped out in faith to do exactly what they felt God was asking them to do.

Their massive step of faith began in 1999, after Lillian heard a speaker talk about the plight of orphans and widows in Sudan. A short two years later, the couple said “goodbye to friends and family and headed to the war-torn African nation to devote their lives to serving God.” They have been there ever since, establishing orphanages, schools and health care centers and bringing hope to those who need it most. In her new book, Adventures Under the Mango Tree: A Story of Hope in War Torn Sudan, Lillian, or, as she is more affectionately known, Mama Lilly, chronicles the couple’s amazing story of faith, sacrifice and obedience as they endeavor to follow Christ­­­­­.

In sharing their story, Lillian explains not only the early motivation that prompted the couple to make such a massive life change, but also shares how, “their faith and trust was strengthened prior to the move by numerous situations in which they had nowhere­­ else to turn but God.” Recalling one day in particular when one of their children was suffering from a severe asthma attack, Lillian details her thoughts and fears, writing, “I immediately prayed to God asking, ‘What do I do?’ I then proceeded to pray over Lance the words of Mark 10:14, ‘Let the children come to me and do not hinder them, for the kingdom of God belongs to such as these.’ And while I read this, I realized in that moment that I needed to trust God for healing, medicine or no medicine. I needed to have full trust in the Lord.”

It was during times such as those, Lillian writes, that she realized “God was working in our lives to help us come to trust and rely on Him for everything. And as it turned out, He was preparing us for what was to come.”

That complete trust has been repeatedly tested in the years since their move to Sudan. From Lillian’s initial fear of sleeping in a rat-infested room her first night in her new Sudanese home; to frantic moments spent trying to keep the orphans in their care quiet during the wee hours of the night as war raged around them; and fear that the flight needed to take Dennis back to America after suffering a heart attack might come too late, Lillian has placed her trust in her Heavenly Father repeatedly and, each time, that trust has seen them through. Together she and Dennis have worked tirelessly, building their non-profit Christ-based organization, Harvesters Reaching the Nations, from its humble beginnings to a burgeoning outreach serving more than 190 orphans in two locations in what is now South Sudan and providing a Christian education to over 500 students including more than 400 children from surrounding villages.

Lillian’s forthright, honest and often humorous accounting of their experience gives readers a firsthand look at what it takes to leave a life of relative ease behind and travel to the ends of the earth to spread the gospel. While it is a must read for every person contemplating work in the mission field, Adventures Under the Mango Tree offers all readers an insightful glimpse into a world few can even fathom. More importantly, through Lillian’s humbling and unique story, we are shown the extraordinary power of a loving God who enables his faithful servants to shine a light in one of the darkest corners of the world.

For more information about Pastor Dennis and Mama Lilly Klepp and Harvesters Reaching the Nations, the Christ-centered organization the couple began in 2001 to provide discipleship, education and health care to vulnerable women and children living in remote regions of the world, please visit their website at www.hrtn.org.