Christians in Kenya are often targets of persecution. On the World Watch List, Kenya ranks at number 18 for high Christian persecution levels. However, God is still moving.

Biblica has recently been in touch with a Muslim-background believer in Kenya with a specific missional calling. Lydia Munene, Biblica’s Area Executive Director for Africa, shares the story: 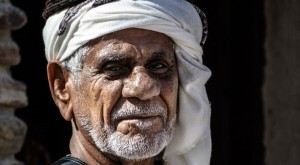 A Muslim man. A man like him found God and is now sharing the Word with everyone he knows.

“We basically have a Scripture outreach program we’ve been running in Kenya over the last few years where we’ve been getting people who do not have Bibles and who need Scriptures for evangelism to use them. So we gave some Bibles to one of our partners, Lifewords, [which] was working with partners in Kilifi and people who have been doing evangelism in that area. Now Kilifi is in the coastal region of Kenya, and it is a place which is dominated by Muslims.”

She says, “So it just happened that our Bibles got into the hands of a former Muslim, we’ll call him Michael. Now Michael got converted by attending a Christian meeting in Kilifi, and once he got converted, he had a passion for distributing Bibles to Muslims so they can know the Word of God, they can know the real Jesus. So he began that work, but he didn’t have access to Bibles. He’s been having small Bible study groups, usually he calls over his friends, they share the Word of God, he gives them passages they can be able to read, and once they get convicted, then he leads them to the Lord.

“Michael was so excited when he learned that we have Bibles we can give to support his evangelistic mission. So he picked some and he started distributing it with small groups and friends he’d been trying to reach out to. In the process, we’ve heard of people coming to know the Lord through Michael’s work!”

Witnessing in potentially hostile situations can be difficult—especially when the person you’re sharing Christ with knows that converting in their situation could cost them everything. “It is not easy to convert Muslims, as you’re aware. When you convert, you are actually in danger and many of them are killed or ostracized from their families.”

But Munene says there is hope, as the church is growing in Kenya. “I think something that gives us hope is that Muslims are searching. We have those who are, of course, very radicalized—they’ll not hear anything about Jesus. And so for those we just need to pray that God would have mercy on them and that He would turn their hearts against evil. In Kenya, we’ve had instances of Christians being killed, massacred. But even then, our greatest joy is there are those who are genuinely seeking the truth. Actually, that’s how Michael was before he came to Christ. He was seeking to know the truth and he came upon Christians, he had the Word of God, and his life was transformed. And in the process, he has become an instrument of transforming Muslims.”