(WNS)–Pro-life demonstrators gathered outside of at least 225 Planned Parenthood facilities in 45 states on Feb. 11 to call on lawmakers to strip the abortion giant of its federal funding.

The nationally orchestrated rallies, dubbed “#ProtestPP” by organizers, sought to draw attention to the hundreds of thousands of abortions Planned Parenthood performs each year and its involvement with the sale of aborted fetal tissue.

New Orleans resident Catherine Cowart, 26, had been wanting to get more involved in the pro-life movement when she came across #ProtestPP.

“Two weeks ago, I felt the conviction to make a stand and use my voice to try to make a difference,” Cowart told me. “I know that this is what God wants me to do.”

Cowart said she suffers from abortion, but not because she had one: Several members of her family have aborted children.

“I often wonder about what my life would be like if my aborted family members had survived and were here today,” she said. 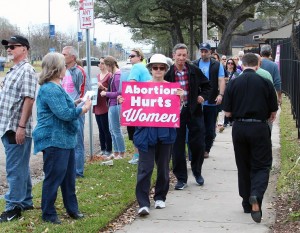 Cowart fired off at least 100 emails to churches and media outlets in the New Orleans area to promote Saturday’s rally, and on an overcast, steamy morning, close to 50 people showed up to hold signs and pray in front of the New Orleans Planned Parenthood facility.

Some walked up and down the sidewalk praying together, holding signs that read, “Abortion Hurts Women,” “Defund Planned Parenthood,” and “Adoption: The loving option.”

Two young women stood together holding a blue sign: “Women deserve better than abortion.” They had driven from their homes Thibodaux, La., more than an hour away.

Emily Albert said she had come “specifically today just to join with people around the country that are standing with our leaders to defund Planned Parenthood and to allocate all of our resources to the other healthcare centers that offer better resources than abortions, that have the other options.”

Some attendees came out of habit: Every second Saturday of the month, volunteers from a Catholic-run sidewalk counseling ministry arrive at the New Orleans Planned Parenthood to pray, distribute literature, and offer counseling to women arriving at the center.

Donna Scheuermann, one of the Catholic ministry volunteers, told me her group stands on the sidewalk handing out “information about other women’s health issues, and giving them options for other places to go for free help.” She added, “We’re a prayerful ministry. We pray the rosary and pray for an end to abortion.”

Across the street, some protesters used a more vivid approach, displaying signs with images of bloodied, aborted babies.

Occasionally, drivers passing by honked their horns and waved, while others shouted from their vehicles. One man in a white Jeep slowed, blasted his horn, and made an obscene gesture at the protesters desiring the defunding of the abortion giant.

“The defunding of Planned Parenthood is a matter of moral principle,” said Monica Migliorino Miller, director of Citizens for a Pro-Life Society, one of the sponsors of Saturday’s rallies. “Not a single cent of American tax dollars should go to an organization that kills innocent human life.”

Other sponsors of Saturday’s #ProtestPP rallies included Created Equal, the Pro-Life Action League, 40 Days for Life, and the Susan B. Anthony List.

Some of Saturday’s rallies attracted a large number of protesters. In St. Paul, Minn., an estimated 250 to 500 pro-life advocates gathered at a rally that attracted several thousand pro-abortion counter-protesters. Another rally in Elmira, N.Y., attracted only a dozen or so pro-lifer protesters. In addition to protests in 45 states, a rally was scheduled to take place at the headquarters of the International Planned Parenthood Federation in London.