By Candie Suarez – Gossip That Matters 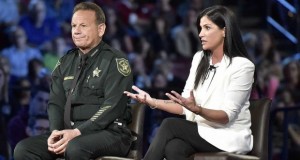 By now you have heard of the abhorrent failure of the Scott Israel Sheriff’s Department. The reason I call it Scott Israel’s is because that is exactly what it has morphed into. To hell with the Broward County taxpayers, who elected this coward. After all, that is what Democrats do, they put their own in office, and then leave them to pollute the offices to which they are elected. There is zero accountability and plenty of blame to go around.

In the Parkland shooting Robert Runcie, the school superintendent and the Sheriff Scott Israel are mainly to blame. These two are two peas in a pod, taking billions from the federal government and doing nothing to protect citizens.

Right after the shooting, these clowns began to point fingers at the NRA, guns, and the Republican Party. It was laughable. Democrats put policies in place that are doomed to fail, but as soon as light is cast on them, they scatter and start the blame game.

Americans are just plain sick of the tired old tune from the Democrats playbook, especially when violence and death are the results. It is not the NRA, guns or Republicans. However, I have never seen cowardice like the one on display days after the shooting, especially by Florida Governor Rick Scott. He showed his true colors when he decided to side with the lunacy of Democrats as it relates to the legal age of gun ownership and the banning of bump stocks. Yes hang your head Governor, you too are a disgrace.

There is something more insidious going on though as it relates to state law regarding our second amendment, and Floridians have no use to soft-bellied elected officials that cave to the policies of hysteria. Days after the theatrics displayed by Democrats on CNN Townhall, we learned that Scott Israel’s deputy Scot Peterson hadn’t gone into the school even though he heard the shooting. That’s right, he purposely stayed outside while Nicolas Cruz mercilessly shot students and staff alike. To call that guy a coward does not do justice. What kind of law enforcement officer you have to be to let someone carry on mass murder, while you coward in safety behind a vehicle?

No one knew this had happened the day of the Townhall? Come on now. Marco Rubio didn’t even bring up the Dear Colleagues letter Obama wrote to Broward County School bribing them to keep Hispanic and black kids who commit school crimes or crimes out of the juvenile system. Democrats and their identity politics fail again, and the result is death.

To date, Israel continues to be Sheriff of Broward County, and the good Governor Rick Scott refuses to take action and remove him. Despite calls to his office, and emails, no response has been forthcoming, and we continue to witness a Rogue Sheriff continue to spew lies and point fingers at everyone except himself. He is not a leader, he is a liar and a fraud, and the good people of South Florida deserve better. The parents of the dead kids deserve better, the community of Parkland deserve better, and all we have right now is Scott Israel. Need I say more.