A TALE OF TWO COUNTRIES: WHAT YOU AREN’T BEING TOLD 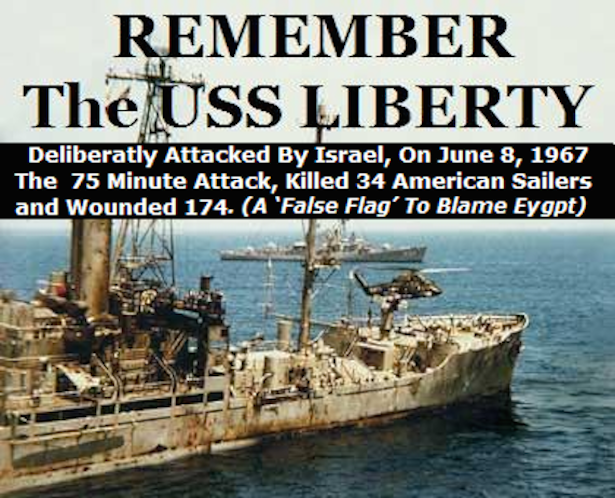 Case One:
A foreign naval vessel is lumbering in international waters. It is flying a brand new 8’x5’ flag, which unmistakably identifies it as a major ally of the country whose coastline is nearest the ship. The ship’s markings are ten feet high on both sides. It is not a warship. It is an intelligence-gathering ship. For all intents and purposes, it is defenseless against any warship or attack aircraft having but four .50-calibre Browning machine guns without shrapnel shields as its only offensive weapons. On board are 286 souls.

Suddenly, and without provocation, the supposed “ally” nation attacks the ship with both warplanes and torpedo boats. For over an hour, the helpless ship is riddled with machine-gun fire, rockets, and torpedoes. Within moments, the ship is completely disabled. As it seems certain that the ship will sink, lifeboats are lowered, but the attacking torpedo boats immediately riddle the lifeboats with gunfire. Helicopters from the aggressive country carrying Special Forces troops hover over the ship, which is now listing at nine degrees. Clearly, the attacking country intends that no one survive.
The ship has no engines, no rudder, and no power. As the Special Forces soldiers from the attacking country are being positioned to launch their final assault, the ship’s Captain barks, “Standby to repel boarders.” One sailor yells, “They’ve come to finish us off.”

The only thing that saves that ship and those survivors that day is eight warplanes from a nearby aircraft carrier that had heard the initial “Mayday” cry from the ship. This caused the attacking country to withdraw. As it was, 34 of the ship’s officers and crew are killed and only a divine miracle and superhuman, Herculean effort from the sailors in the bowels of that steel graveyard keeps that ship afloat. When the attack first began, one general from the attacking country protested to his commanding officer saying, “This is pure murder.”

But what the country whose ship was attacked and whose men were killed did is most curious. It did NOTHING. In fact, the government of that country immediately declared that the attack had been a “mistake” and then proceeded to completely cover up what had happened. And to this day, the citizens of that country know almost nothing about what took place on that fateful day.

Case Two:
Two foreign military boats illegally enter the territorial waters of a nation. These boats represent a country that has declared the nation whose waters have been molested to be an enemy state. National leaders of the offending country have openly called for military action against the state–up to and including nuclear action. The offending nation is anything but an ally of the nation whose waters have been encroached.

The country whose waters have been compromised does what ANY country would do (including the offending country if the tables are reversed) if unauthorized foreign ships (especially military ships) encroach upon its territorial waters: it seizes the vessels. The country did NOT open fire on the sailors. No one was injured. After neutralizing the perceived threat and detaining the sailors, the country provides the sailors who had illegally entered their waters with a meal and then releases them and their boats unharmed.

But instead of being grateful for the way the offended nation had prevented what could have easily escalated into international hostilities, many of the leaders and media spokesmen from the country whose ships had illegally entered another nation’s territorial waters immediately accuse the offended nation of being the “aggressor” and use the incident to further enflame hatred against the alleged enemy state–including the incitement of war against it.

Case One was Israel’s murderous attack against the USS Liberty on June 8, 1967. Case Two was Iran’s incredibly-restrained handling of the U.S. naval vessels’ illegal incursion into its territorial waters not too many days ago.

Read the true story of Israel’s attack against the USS Liberty here.

Read the true story of the Iran incident here.

The verbal attacks against Iran by U.S. politicians and dominant news media truly staggers the imagination. I think Pat Buchanan’s response to FOX News’ Sean Hannity was perfectly stated. After listening to Hannity’s senseless rant against Iran, Pat said, “Sean, you’re hysterical.” Hysterical seems to be the word that best describes most of what we are hearing today. See the Hannity/Buchanan exchange here.

During a radio interview with Michael Berry, Ron Paul rightly observed, “I think there’s a distortion of the facts, for instance, we have learned and have been conditioned to distrust and hate the Persians and they’re going to kill us, just look at the conditioning we had for Saddam Hussein who used to be an ally and we gave him his first nuclear reactor. So, there is a lot of that that goes on, but there’s no history to show that Iran are aggressive people. When was the last time they invaded a country? Over two hundred years ago.” Read the transcript here.

ActivistPost.com accurately answers the question, “Is Iran a threat to the health and safety of U.S. citizens?” The report states: “Iran has never attacked the United States, or even any of her interests overseas. In fact, they have not attacked or invaded anyone in at least 270 years. And they haven’t even threatened to harm the U.S. unless of course they are attacked first. . . . Iran is not an aggressor and certainly not a national emergency threat.”

The report goes on: “Even if they did [have a nuclear weapons program], why is that reason to attack them? Just having a weapon doesn’t make a country a threat. Plenty of countries have nuclear weapons and we don’t consider them a threat.”

The report continues: “Iran will not attack the West militarily with a nuclear weapon, or even conventionally, because they know they would be inviting their immediate destruction. Iran is a sophisticated secular society, much like Iraq was before America invaded. In fact, Iran has the third largest Jewish population in the world who live in harmony with Muslims and others. In other words, they have a lot to lose to invite war with anyone, and they know that any move viewed as aggression would be met with swift and overwhelming force. The West wants the world to believe their leadership is primitive and stupid, but they aren’t. 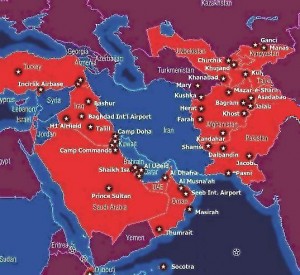 “Over 45 U.S. bases surround Iran. These bases are in addition to the fleets of U.S. warships parked in waters near Iran. A picture is worth a thousand words. Who’s the real threat here?” See the map and the report here.

Recall that even when many Arab nations were involved in the Six Day War with Israel back in 1967 (including Saudi Arabia, Egypt, Libya, etc.), Iran did NOT participate. And what most Americans do not know is that immediately following the 9/11 attacks in the U.S. (that Iran had nothing to do with), tens of thousands of Iranian citizens held demonstrations, candlelight vigils, and moments of silence in SUPPORT of the United States. (Do the research for yourself.) Americans would be shocked to know that the vast majority of average Iranians actually hold very favorable views of the United States. The “Death to America” rallies we hear so much about actually do NOT represent the views of the vast majority of the Iranian people–no more than the copious “We Are Change” pro-Obama rallies represent the views of a majority of the American people.
Plus, the oft-quoted threat by former Iranian President Mahmoud Ahmadinejad to “wipe Israel off the map” is in reality a complete fabrication of the Western news media. See this report here.

The Iranian Foreign Minister tried to set the record straight–albeit most in the U.S. media continue to regurgitate the myth that Iran has threatened to militarily destroy Israel.
“Iran has no intention of destroying Israel and has actually saved the Jews three times in history, but the current Israeli regime is a threat to Tehran, Iranian Foreign Minister Mohammad Javad Zarif has said in an interview with American media.

“Speaking with NBC, Zarif slammed [sic] the Israeli prime minister, Benjamin Netanyahu, after he once again said in his Monday’s speech before the US Congress that Iran openly threatened to wipe Israel off the map.  “The Iranian FM urged Netanyahu to refresh his knowledge of history as his comments have not only ‘distort[ed] realities of today,’ but also go against the Bible and Jewish sacred texts. “‘He even distorts his own scripture. If you read the book of Esther, you will see that it was the Iranian king who saved the Jews…’ Zarif said.

“‘We’re not about the annihilation of Jews,’ Zarif stressed, reminding the channel that 20,000 Jews reside in Iran ‘in peace’ and even have their own representative in parliament. “‘We have a history of tolerance and cooperation and living together in coexistence with our own Jewish people, and with Jews everywhere in the world. If people want to espouse fear mongering to fan such hysteria in the world, that’s to their detriment,’ Zafir said.”
Here is the report.

And here is one of the most truthful and accurate assessments that I have ever read of why the U.S. is enmeshed in all of these current conflicts in the Middle East.

Had Case Two referenced above even remotely resembled Case One, we would be in the middle of World War III right now. Yet, President Lyndon Johnson and the U.S. government allowed a foreign country to commit a flagrant act of military aggression against a U.S. naval vessel–killing dozens of American sailors and Marines in the process–with no repercussions whatsoever. It even chose to cover up the incident and pretend it never happened. Why? Because the attacking country was Israel–a supposed ally of the United States and a nation that our government often uses to do much of its dirty work in the Middle East. Not to mention the fact that the Israeli lobby is the most influential and wealthiest lobby in Washington, D.C.; or the fact that the false doctrine of “Christian Zionism” (what an oxymoron) literally governs the prevailing politics among a majority of America’s churches–especially the largest ones lead by politically-powerful televangelists; or that a majority of U.S. congressmen and senators are joined at the hip (and bank account) with the Israeli lobby.

In much the same way, the U.S. government has chosen to cover up the attacks that killed a U.S. ambassador and other Americans in Benghazi. Why? Because the truth surrounding Benghazi would help expose what the U.S. government is really doing in the Middle East and would implicate our government’s role in facilitating terrorists.

It’s time for Americans to start facing the cold, harsh reality that our federal government cares absolutely NOTHING about the lives of American citizens. It didn’t give a hoot in hades about the victims of the USS Liberty, and it didn’t give a hoot in hades about Ambassador Chris Stevens and the others who died in Benghazi. But let Iran (a nation that poses absolutely no imminent threat to the United States) protect its own territorial waters (with no harm to any American citizen), and the national press corps and their neocon cohorts in Washington, D.C., are ready to start World War III.