And now these three remain: faith, hope and love. But the greatest of these is love.
1 Corinthians 13:13

Takashi Nagai, a descendent of a Samurai family, a patriot and a pioneering scientist embarks upon a quest for the “ultimate truth” – the meaning to life and death. It is a journey of discovery that will change his life forever. An extraordinary story of persecution, courage, faith and love unfolds as he uncovers the Christian legacy of Nagasaki and meets his own destiny. 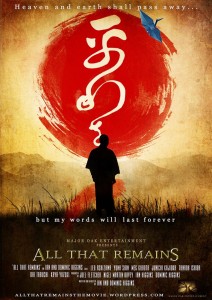 Along the journey we meet Paul Miki and the 26 martyrs of Japan and learn how the building of Urakami cathedral – the grandest cathedral in the East came to symbolize the enduring faith of the Nagasaki Christians. Then Takashi meets Midori, the woman who will finally transform a skeptical man of intellect, into a man of the heart.

But on one sunny, August morning in 1945, everything vanishes in a blinding flash of light, and the world is turned into a burning inferno. The second atomic bomb to be used in warfare has just exploded over Nagasaki. Midori is one of the estimated 80,000 souls killed instantly.

Now the scientist is forced to turn to God, as he must become a father and a teacher, not just to his two young children, but to an orphaned nation, sick and debilitated by war.

Having been diagnosed with leukemia (a result of prolonged exposure to X-rays), he dedicates the rest of his short life to promoting world peace through his work as a writer. After a battle against censorship, his first book “The Bells Of Nagasaki”, becomes an instant bestseller throughout Japan, as a people, defeated and demoralized by war, re-discover through his words, the healing of power of love.

Now confined to his bed and sensing his time is running out, Takashi begins to write his final and most poignant book, “Leaving My Beloved Children Behind”, a serious of letters addressed to his children.

“All That Remains” is an inspiring story of supreme sacrifice and a testament to the strength of faith and the power of love. After a much anticipated release the film is now available on DVD.

An “All That Remains” blog page acts as a production diary, where more in-depth information, behind the scenes glimpses etc. will continue to run.