America: Imagine the World Without Her 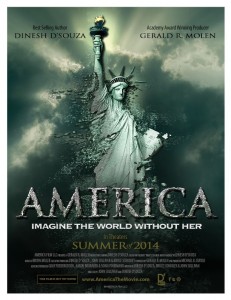 America: Imagine the World Without Her

AMERICA:  IMAGINE THE WORLD WITHOUT HER is a follow up to Dinesh D’Souza’s documentary 2016:  OBAMA’S AMERICA, the second most successful political documentary of all time. AMERICA explains the attack that America’s values are currently enduring from the Radical Socialist Left. D’Souza goes through four or five major left-wing attacks on America’s history. He explains that, if leftists and socialists can change how people view America’s past and make them ashamed of their heritage, they can destroy America’s founding principles.

AMERICA addresses some very important that are widely ignored these days. The attack on liberty has been a systematic strategy. D’Souza understands that, unless Americans know their history, they will have no idea where they are going, and where they are going now isn’t pretty. The stories told in AMERICA are powerful and uplifting. The final third of the movie isn’t as well connected to the movie’s first, wonderful two thirds. Also, some violence and brief foul language are inappropriate for younger children. Nonetheless, AMERICA is an important, inspiring, informative documentary that hopefully will produce positive change based on America’s original biblical values.