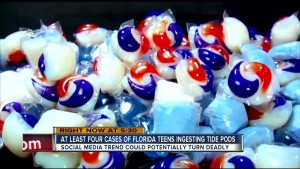 YouTube and Facebook have been desperately trying to stop liberal kids from participating in a popular new trend that involves eating laundry detergent, but it’s not working. Now, some businesses are taking advantage of the phenomenon.

Earlier this week, the American Association of Poison Control Centers (AAPCC) issued a “high alert” warning that said the trend of teens intentionally ingesting Tide Pods has “increased in its popularity despite repeated warnings.”

Like many trends, the Tide Pod Challenge began on social media. Teenagers posted videos of themselves attempting to eat the packets of liquid laundry detergent while daring their friends to do the same.

In the first two weeks of 2018, US poison control centers handled 39 cases of teenagers intentionally eating Tide Pods, according to the AAPCC. During the next week, there were another 47 cases reported, bringing the total number of teens sent to a poison control center for eating laundry detergent to 86 this year.

“We cannot stress enough how dangerous this is to the health of individuals—it can lead to seizure, pulmonary edema, respiratory arrest, coma, and even death,” Stephen Kaminski, CEO and Executive Director at AAPCC, said in a statement.

Last week, YouTube began removing videos that depicted users eating Tide Pods, saying they were in violation of their guidelines. “YouTube’s Community Guidelines prohibit content that’s intended to encourage dangerous activities that have an inherent risk of physical harm,” YouTube said in a statement obtained by BuzzFeed. “We work to quickly remove flagged videos that violate our policies.”

Facebook has also been removing videos of the Tide Pod Challenge from its platforms, including Instagram. A Facebook spokesperson told CNN they “don’t allow the promotion of self-injury and will remove it when we’re made aware of it.”

Procter & Gamble, Tide’s parent company, said it is working with social media platforms to “remove harmful content that is not consistent with their policies,” according to the Daily Mail. Tide also released a public service announcement video with New England Patriots star player Rob Gronkowski telling teens that eating Tide Pods is a “bad idea.”

While Tide has been working with YouTube and Facebook to distance their companies from the dangerous challenge, a bakery in Carolina Beach, North Carolina has decided to capitalize on the phenomenon with their very own Tide Pod donut.

One of the employees at Wake N Bake Donuts said she made the signature donut with the same bright colors as the Tide Pod in order to teach kids “the difference between what to eat and what not to eat.”

However, after the donut was featured on the local news, the manager posted a video on Facebook telling customers they would have to order in advance if they wanted to try the Tide Pod donut. 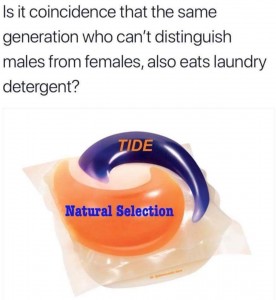 “After today it’s just going to be special orders, but we will make them for you if you also want to teach your kids lessons about, you know, what to eat and what not to eat,” the manager said. “Because I guess some think that a Tide Pod donut looks like a Tide Pod, which I see several differences.”

Tipsy Bartender, a website for cocktail recipes, also created a Tide Pod-inspired beverage, which is made with Blue Curacao, White Chocolate Liqueur and Orange Vodka.

The website says that the drink was made to “celebrate the aesthetics of the pods,” but added they do not “endorse or support the vicious viral trend of the Tide Pod Challenge.”

The joke about Tide laundry detergent capsules being fruit-flavored snacks has been circulating on the internet since the Onion wrote an article titled “So Help Me God, I’m Going To Eat One Of Those Multicolored Detergent Pods,” in 2015. The joke only recently became a reality when teens began challenging each other to literally consume the dangerous chemicals on social media.