Any Answers For a Desperate World?

By Bill Ellis
(ANS) — I was introduced to TIME magazine during my freshman year of college and have been a regular reader since those long-ago days. I have met and listened to an interesting university speech by the present Managing Editor, Nancy Gibbs. 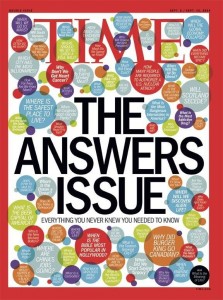 The cover of the September8/September 15, 2014, issue had a crowded front cover with many questions in colorful circles. Bold black letters headlined “The Answers Issue” with a subtitle, “Everything You Never Knew You Needed To Know.” Reading the cover page was enough to put your mind into a titanic whirl of confusion. A scintillating issue!

It reminded me of our world high on questions and problems and short on answers and leadership. You would think that in the United States, England, Germany, Switzerland, France, Italy and other nations, there would be leaders who had some sense of solving the mass of problems facing today.

The September issue of DECISION magazine asked, “Who Can Save Us?” Our day, throughout our nation and the world is afflicted and crippled by pestilence, persecution, oppression, disease, crime of every description and an overwhelming darkness of indescribable sin and immoral hellishness. Is there any light, even a tiny ray of light that might lead us out of destructive darkness?

Religious liberty, which America has prized since its beginning, is under attack. In recent times some have died because of their religious convictions. Being determined to live by what they believe has had a price tag which cost more than life itself – a price some have had to pay. The whole world seems to be involved in a struggle for life and a culture war that increases its intensity with each passing day.

President Franklin Delano Roosevelt addressed the United States on the eve of problems related to the kind we face today with these memorable words, “We have nothing to fear, but fear itself.” Patrick Henry in troubled times cried out, “Give me liberty or give me death.” That seems to be the price of freedom today.

Franklin Graham concluded a recent magazine article on the “Signs of the Times”, with these words from an ancient Psalm, probably from the heart and mind of David, “Let all the earth fear the Lord; let all the inhabitants of the world stand in awe of Him . . . The Lord brings the counsel of the nations to nothing; He makes the plans of the peoples of no effect. The counsel of the Lord stands forever . . . blessed is the nation whose God is the Lord” (Psalm 33:8-12, NKJV). We have hope only in the power of God and His Son, Jesus. We should try God before He tries us in Holy Judgment.