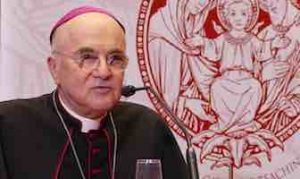 This is perhaps the most pastoral statement on Pope Francis ever published by a Catholic bishop. According to Archbishop Carlo Maria Viganò, the Church’s divine mission to reach out and save souls has been betrayed by the present pontificate. Consider this excerpt from the Archbishop’s statement:

“With the declaration he [Pope Francis] signed in Abu Dhabi, in which he states that ‘The pluralism and the diversity of religions, color, sex, race and language are willed by God in His wisdom,’ and by his constant deviant condemnations of so-called ‘proselytism,’ Francis has not only mortified every missionary impulse but has indeed rejected the mandate given by Christ to all the Apostles: ‘Go therefore and make disciples of all nations, baptizing them in the name of the Father and of the Son and of the Holy Spirit, teaching them to observe all that I have commanded you’” (Mt 28:18-20).

For twenty centuries, the Catholic Church has professed faith in Jesus Christ, the only Savior, which has come down to us intact, as she received it from the Apostles and Fathers of the Church at the price of the blood of the Martyrs, and by the witness of the Confessors of the faith and of innumerable Saints of every people and language. This faith has been handed down by parents to their children, by priests and religious; it has been spread by zealous missionaries to every continent in the world, under the guidance of the successors of the Apostle Peter who have guaranteed the unity of Christ’s Bride by confirming the brethren in the faith.

For almost seven years now, the successor of the Prince of the Apostles, who was entrusted with the mandate Christ conferred on Peter after his profession of faith — “You are the Christ, the Son of the living God” (Mt 16:18) – has abdicated his ministry to confirm the brethren in the faith. Pope Francis has never confirmed anyone. We painfully acknowledge how divisive and destructive his ministry has been. – LifeSite News