Are the Blood Moons Really Prophetic Signs From God? 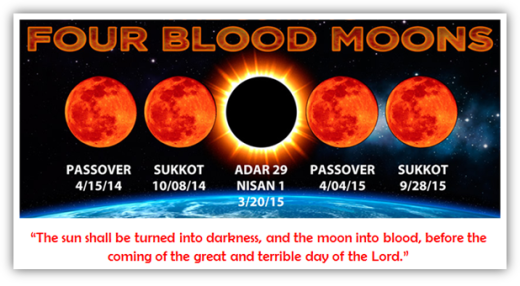 Blood moons are a beautiful sight. These astronomical anomalies have become a hot topic for both backyard astronomers and Christians who consider them prophetic signs.

Are the blood moons signs? Or are they simply God’s handiwork?

A blood moon is a total lunar eclipse, when Earth stands between the moon and sun. Because Earth blocks the sun’s light, the only hue that emerges through Earth’s atmosphere is red, casting a blood-red color on the moon.

Some Christians associate tetrads (fours) of blood moons with significant events in Jewish history and argue that something earth shattering will happen to Israel during the current tetrad: April 2014 through September 2015.

Luke later quoted Joel in Acts 2:20, and the apostle John used the same prophecy in Revelation: “And the moon became like blood” (6:12).

However, each time a blood moon is mentioned, it is in conjunction with other cosmic events occurring simultaneously. So if a biblical blood moon has occurred, we should also expect to see a darkened sun and only one blood moon, not tetrads. Furthermore, each writer pointed to the same future event.

Blood-moon prophecy advocates argue tetrads appeared during important events in Jewish history: the Jewish expulsions from Spain in 1492; Israel’s independence in 1948; and in 1967, during the Six-Day War. However, the first blood moon occurred in April 1949, after Israel had already gained its independence in May 1948.

Similarly, a tetrad appeared in 1493, a year after the Jewish people were expelled from Spain. If the blood moons are signs, they should have occurred before those events. Wrote prophecy and Bible scholar Mark Hitchcock, “Consider, for instance, if you are driving down the highway and see a sign for an exit after you pass it. That sign isn’t much help. [Likewise], the blood moon tetrad of 1493-1494 cannot be a sign of what happened … in 1492. This just doesn’t fit the definition of a sign.”

Placing prophetic value on these blood moons grabs our attention, but the referenced events are random. Some involved a serious struggle but ended in joy, like Israel’s independence and the Six-Day War, while others ended only in sorrow, like the expulsion from Spain. Furthermore, there were important historical Jewish events, such as the destruction of the two Temples and the Holocaust, that were unaccompanied by blood moons.

Why? Because there is only one biblical “blood moon,” and it will appear in the place of a darkened sun and burned-out stars when the Lord judges this world. Until then, every blood moon is an example of God’s majestic handiwork.