St. Mary’s County Sheriff Tim Cameron told WRC-TV, the NBC affiliate in Washington, that a male student at the high school opened fire on a female student shortly after school started. A second male student also was shot. Cameron said the school resource officer then fired his own weapon at the gunman, bringing the violence to an end.

The gunman was later pronounced dead, and the girl was critically injured, WRC reported. The third student also is being treated for a gunshot wound.

Great Mills is about 60 miles southeast of Washington, D.C., where the “March for Our Lives” rally for school safety and gun control is scheduled to take place on Saturday. 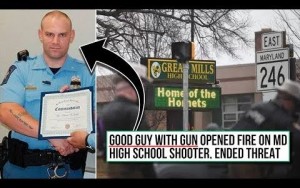 Yesterday we received a report that a student in the hallway during transitions overheard two students mention “shooting” and “school”. We interviewed the student with our SRO, viewed video, interviewed other students, and contacted central office.  The threat was not substantiated.  Late last night, additional information was circulated quite extensively on social media about a potential threat at school today.  Law enforcement was contacted and an investigation was conducted, which included interviews with students and parents to determine the validity of the potential threat. The threat to Great Mills High School has not been validated at this time. However, we will have additional security today and we will continue to investigate the source of the postings.  Also, continue your vigilance and alert us to any information you may encounter. If you see something, say something.

Tomorrow, students will have the opportunity to discuss school safety during One Lunch. I am very proud of our students and appreciate their vigilance and willingness to notify adults if they see something that concerns them.

Thank you and please let me know if you have any questions or concerns.

Maryland has relatively strict gun control laws. As of October 1, 2013, a Maryland resident must possess a valid Handgun Qualification License before purchasing, renting, or receiving a handgun. According to the Maryland State Police, the sale or transfer of semiautomatic “assault” weapons is banned.