Around The World Closeup: Lee Wai-sze

Winning championships and medals almost never happened for Hong Kong Olympian Lee Wai-sze.
Her fledgling career nearly ended, just as it was about to explode, after a chance run-in with a stray dog.

During a routine training ride in 2009 in her native Hong Kong, Lee, also known as Sarah Lee, saw a dog and swerved to avoid it. She wound up with a broken left wrist. Three surgeries later, doctors told her a full recovery wasn’t possible, and her coach, Shen Jinkang, wasn’t encouraging either, telling Lee she should quit. 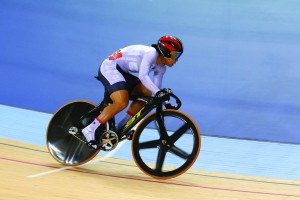 oubt and discouragement began to mount, and Lee considered retiring at the age of 22 from a sport she had shown so much promise in just six years earlier at the age of 16, when, in 2003, she was selected to train with an elite group of Hong Kong cyclers. A year later, showing the promise they saw in her, she began racing full-time.

But the dreams and expectations were about to become distant memories for the then-22-year-old Lee, who grew up in poverty and was reared in a 200 square-foot house with her parents and two older siblings and had overcome anemia to reach such a high level.

However, just as she hit her lowest point as an athlete after she broke her wrist, she was introduced to Christ.

“There is nothing greater than the love of Jesus. He isn’t motivated by any self-interest. Life should be filled with love,” Lee told the South China Morning Post, a Hong Kong English-language newspaper that said Lee’s faith “has since been a source of strength and support.”

“There are bound to be ups and downs in life,” Lee continued. “Changes are inevitable – just like you can’t do anything against aging. My injury is a minor problem in the grand scheme of things.”

Since recovering fully from the wreck, she has been on a tear in the cycling world.

She is at the top of her sport as the 2016 Rio Olympics approaches, attested to her two most recent medals in September at the Asian Games—both gold.

It was the first time a Hong Kong athlete had ever won two Asian Games gold medals in the same year.

The 2012 Olympic bronze, though, still stands as her biggest accomplishment, breaking barriers in Hong Kong that elevated her to hero status. She was the only Hong Kong athlete to win a medal in London, it was the first Olympic cycling medal for anyone from her country, and it was only the third time a Hong Kong athlete had won any Olympic medal, after Lee Lai-shan’s 1996 sailing gold and Li Ching and Ko Lai-chak’s 2004 silver in men’s table tennis doubles.

“I hope to be able to challenge in this event again in the next Olympic Games,” she told the South China Morning Post after winning the two Asian Games gold medals in September. “Although there are still many top sprinters from Europe and other parts of the world.”

If determination is an indicator, though, Lee will be right in the mix.

This story was published in the Spring 2015 issue of Sports Spectrum.