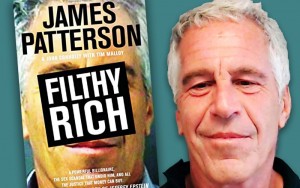 A new book is raising questions about former President Bill Clinton’s already sleazy sex history — and if true, these allegations could TOTALLY shake up the 2016 presidential campaign. Bill Clinton’s disgusting past as a sexual predator is back in the limelight in a book released Monday by bestselling author James Patterson.

The “Lolita Express” was Epstein’s private jet. Clinton had taken at least 10 flights on the Lolita between 2001 and 2003, suspiciously foregoing Secret Service detail at least five of those flights, Fox news reported.

This jet soon became infamously known as one of Epstein’s favorite locations to take advantage of underage girls, and Clinton’s request to fly solo became much more suspicious, Patterson says.

This isn’t a fringe lunatic writing this, either. Patterson is one of the best-known authors in America, and the 300-page non-fiction novel has an original print run of 500,000 copies and is predicted to be a best seller.

It describes the close relationship between the two powerful men, and the injustice of the alarmingly short, 13-month sentence Epstein received following his disgusting sexual escapades and abuse accusations.

Patterson describes Epstein’s case as a “yearlong assault” on prosecutors, alleging they were biased and weren’t fit to be on the case. His victims attempted to appeal the leniency of the sentence, but consistently failed.

The two were such close friends, that Epstein had the former president’s email addresses and multiple phone numbers. Clinton praised Epstein for his “insights and generosity,” and legal documents revealed that Clinton owed ‘favors’ to Epstein.

Epstein even claimed to be a co-founder of the Clinton Foundation in his plea deal and received a lesser sentence for operating a sex ring with underage girls due to his charitable work with Clinton’s family foundation.