Bill Gates: No Scientific Explanation For How The World Came About 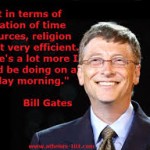 (WNS)–In a long, in-depth interview with Rolling Stone published in March, Microsoft founder Bill Gates said that while he agrees God could be a figment of mankind’s needy imagination, science cannot fully explain how the world came about.  “I agree with people like Richard Dawkins that mankind felt the need for creation myths,” Gates told writer Jeff Goodall. “Before we really began to understand disease and the weather and things like that, we sought false explanations for them. Now science has filled in some of the realm—not all—that religion used to fill. But the mystery and the beauty of the world is overwhelmingly amazing, and there’s no scientific explanation of how it came about. To say that it was generated by random numbers, that does seem, you know, sort of an uncharitable view. [laughs] I think it makes sense to believe in God, but exactly what decision in your life you make differently because of it, I don’t know.”