“The gold of that land is good; the bdellium and the onyx stone are there.” (Genesis 2:12)

A treasure-trove of raw gold worth billions of dollars is believed to be sitting under Mount Eilat in southern Israel, Breaking Israel News has learned.

In an exclusive interview, Rabbi Yehuda Glick, the Executive Director of The Temple Mount Heritage Foundation in Jerusalem, revealed the news, which had been kept under wraps for the last several years.

Glick is perhaps best known for his life’s mission of assuring that the Temple Mount is accessible to all people from every religion who want to worship at the holy site. His dedication to the Temple Mount resulted in an October 2014 assassination attempt on his life by a Palestinian terrorist.

Shot four times in the chest, Glick has made a miraculous recovery and continues his work to open the Temple Mount to prayer for all peoples.

Glick told Breaking Israel News that there are billions of dollars worth of gold in Mount Eilat, which he and his partner, Yehoshua Friedman, have received an exclusive license to unearth by the Israeli government.

Explaining the discovery, Glick said that everything began with Friedman, a Temple Mount researcher who had been studying each of the 12 unique stones set on the breastplate of the High Priest as described in the Bible. Each stone represents one of the 12 tribes of Israel. 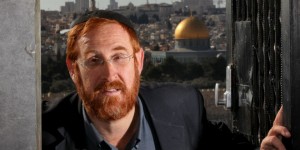 Rabbi Yehuda Glick is leading efforts to mine billions of dollars’ worth of gold in southern Israel to be used towards rebuilding the Jewish Temple.

During his studies, Friedman realized that without a geology background he could not properly appreciate the depths and meanings behind each of these stones. This led to his discovery that in 2007 gold had been found in the mountains of Eilat by an Australian research team, who later abandoned the dig because the value of gold at the time was not worth their efforts. Friedman and Glick, knowing the Biblical verses concerning gold in the Land of Israel, realized that this was a project which had to be pursued.

Together, alongside several other companies seeking to find gold in the land of Israel, Glick and Friedman presented to the Israeli Ministry of Energy and Infrastructure a tender to dig in the Eilat Mountains.

“Because of the extensive Biblical proof we presented about the exact location where the gold was to be found, we won the license to begin digging,” Glick told Breaking Israel News.

Their company, Gold Deposit Ltd., now has a two-year exclusive permit, from January 2015 to December 2016, to excavate the chosen area and find the gold.

When asked what these modern day Biblical explorers plan to do with their billions in gold, Rabbi Glick replied, “Ultimately, we expect to use the gold in the rebuilding of the Third Temple.  Whether we use the gold itself for creating vessels and decoration or by selling the findings and using the money to buy the materials and manpower needed to rebuild the Temple, we look forward to that great day!”